Considering the three kinds of tea are A, B, and C. 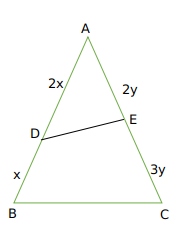 
Let the amount invested by Anil Bobby and Chintu be x, y, and z.

As per the information provided :

Since the profits are distributed in the ratio of their investments :

With a 3% decrease in the profits the value of profit earned by A decreased by Rs 420 which was 70 percent of the total invested.

The initial investment is equivalent to Rs 20000.

This is the total amount invested.

Hence he invested 20% of the total amount.

Bobby invested the other 10 percent.