These questions are based on the table below presenting data on percentage population covered by drinking water and sanitation facilities in selected Asian countries. 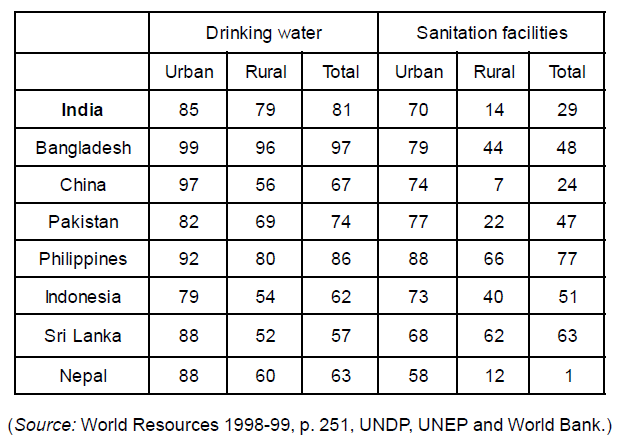 India is not on the coverage frontier because

A. it is lower than Bangladesh in terms of coverage of drinking water facilities.

B. it is lower than Sri Lanka in terms of coverage of sanitation facilities.

C. it is lower than Pakistan in terms of coverage of sanitation facilities.

D. it is dominated by Indonesia.


For a country to be on the coverage frontier, it should not be dominated by any other country. That is no other country should have both (sanitation facilities and drinking water coverage) better than it.
The first three options, though true, are not the reason for India not being on the coverage frontier. That is because they don't mention the other parameter at all.

For example, option A doesn't mention sanitation facilites while options B and C don't mention drinking water coverage. Hence, none of A,B and C are the reason India is not on the coverage frontier.

Option D is factually wrong as Indonesia has lesser drinking water coverage than India and doesn't dominate it.

Hence, none of the options given are correct.

These relate to the above table with the additional provison that the gap between the population coverages of ‘sanitation facilities’ and ‘drinking water facilities’ is a measure of disparity in coverage.

The disparity in all other countries is less than 65.

These relate to the above table with the additional provison that the gap between the population coverages of ‘sanitation facilities’ and ‘drinking water facilities’ is a measure of disparity in coverage.


Each question is followed by two statements, A and B. Choose the option based on the given statements and questions

A. The heaviest and the lightest members of the class weigh 60 kg and 40 kg respectively.

B. Exclusion of the heaviest and the lightest members from the class does not change the average weight of the students.


Using statement A, we cannot infer the number of students in the class.

Using statement B, we can say that the sum of weights of heaviest and the lighest persons is equal to twice the average weight of the class. But we cannot infer the number of students in the class.

Using both the statements as well, we do not have any information through which we can find the answer.

Hence, option D is the answer.

A small storage tank is spherical in shape. What is the storage volume of the tank?

A. The wall thickness of the tank is 1 cm.

B. When the empty spherical tank is immersed in a large tank filled with water,20 litres of water overflow from the large tank.

We can calculate r using this equation.

A.The field is rectangular in shape.

B.The field is a polygon, with C as one of its vertices and A the mid point of a side.

Using only statement B, we know that C is one of the vertices, but we do not know how many vertices exist.

Using both A and B, we know that the field is rectangular in shape and the length and breadth are 300 metres and 100 metres.

Hence, we can find the value of the diagonal which is the maximum distance between any two points inside the field.

In statement 1, since we know both the angles, we can calculate the growth for both the periods and hence the ratio of growths.

Using statement 2 alone, we cannot determine the answer. Option a) is the correct answer.

There is a circle with centre C at the origin and radius r cm. Two tangents are drawn from an external point D at a distance d cm from the centre. What are the angles between each tangent and the X-axis?

A.The coordinates of D are given

B.The X-axis bisects one of the tangents.


From statement I, We can draw the following figure 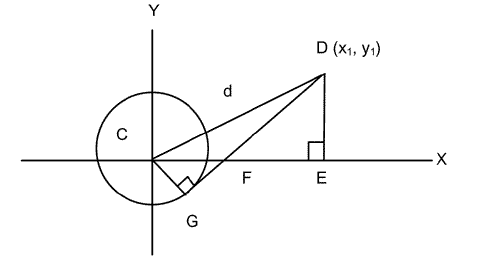 Similarly in triangle CDE, we know CE and DE, so we can find angle CDE.
From this we can get the angle FDE. Now in right angled triangle FDE, we can find the angle DFE.
So we can answer from statement I
Now let us consider statement II 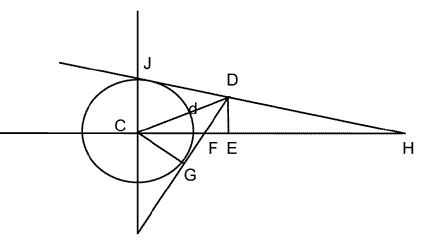 Find a pair of real numbers x and y that satisfy the following two equations simultaneously. It is known that the values of a, b, c, d, e and f are non-zero. ax + by = c dx + ey = f

Using statement A, we can modify the equation ax + by + c to k(dx+ey=f)

As the slopes are equal and the intercepts are not equal, we can say that the equations do not have a solution.

Hence, we can answer the question using statement B but not A.

Three professors A, B and C are separately given three sets of numbers to add. They were expected to find the answers to 1+1, 1+1+2, and 1+1 respectively. Their respective answers were 3, 3, and b How many of the professors are mathematicians?


The value of b is unknown in this question.

Using statement b, We cannot find out for sure if A and C are mathematicians or not.

So the question cannot be answered even by using both statements together.