Match the following idiomatic references to parts of the human anatomy

Hence, the answer is option C.


Answer the following questions based on the information given below.

Find the maximum number of times any one of the given words fits the sets of sentences:

The word "Arise" fits sentences 1 and 3. Thus, it is used twice.

Thus, the maximum number of times a word fits a sentence is 2.

Hence, the answer is option C.

Which two sentences in the following convey the same idea? Choose from the combinations listed below:
1) He is in a fool’s paradise
2) He can’t see the wood for the trees
3) He can’t distinguish between reality and fancy.
4) He is unable to separate unimportant details from the really important ones


Sentence 2 is an idiom which means not being able to see the big picture or the important things.

Hence, the answer is option B.

Find the correct match of grammatical function with usage for the word THEN. 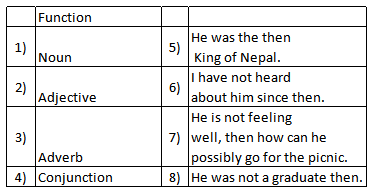 Hence, the answer is option B.

We can never make our beliefs regarding the world certain. Even scientific theory of a most rigorous and well-confirmed nature is likely to change over a decade or even tomorrow. If we refuse to even try to understand, then it is like resigning from the human race. Undoubtedly life of an unexamined kind is worth living in other respects—as it is no mean thing to be a vegetable or an animal. It is also true that a man wishes to see this speculation domain beyond his next dinner.
From the above passage it is clear that the author believes that


"If we refuse to even try to understand, then it is like resigning from the human race. Undoubtedly life of an unexamined kind is worth living in other respects—as it is no mean thing to be a vegetable or an animal."

Hence, the answer is option D.


Answer the question based on the passage given below.

Rajendra K. Pachauri, head of the Intergovernmental Panel on Climate Change, is getting nightmares because of the Nano, Tata’s soon - to - be - launched Rs. One lakh car. Sunita Narain of the Centre for Science and Environment (CSE) says that it isn’t the Nano by itself but cars overall that give her nightmares. The villains in my nightmares are neither the Nano nor cars overall, but stupid government policies that subsidize and encourage pollution, adulteration and congestion.

Sanctimonious greens call the Nano disastrous because of its affordability - millions more will now clog roads and consume more fossil fuel. This is elitism parading as virtue. Elite greens own cars, but cannot stand the poorer masses becoming mobile, since the consequent congestion will eat into the time of the elite!

More logical would be a protest against big cars that use more space and fuel, or highly polluting old cars. Instead, green hypocrites aim at a new car with the lowest cost, best mileage and least emissions. The Nano will not burden us with too many cars. India has very few cars per person by world standards. London and New York have ultra-high car densities, yet have clearer air than Delhi. Our problem is too many bad
policies, not too many cars.

We subsidize vehicles on a gargantuan scale invisible to lay folk. Roads and flyovers cost crores to build and maintain, yet road use is free (save on a few toll roads). Traffic police and lights are costly, yet are provided free. These invisible subsidies starve cities of funds to expand roads and public transport. Land in cities now costs lakhs per square metre. Yet parking is free in the suburbs, and often costs just Rs.
10 day per day in city centres. A single parking space of 23 square meters occupies land worth Rs. 40 lakhs. A car occupies more space than an office desk, yet the desk space pays full commercial rent while parking space costs just about Rs. 10 per day.

Daily parking charges range from $30 (Rs. 630) in Washington to $30 (Rs. 1260) in New York. CSE launched a sensible campaign to raise parking fees in Delhi to Rs. 120 per day, but was foiled. So, parking space now exceeds green space, a scathing comment on priorities.

The world price of crude oil has risen 13 fold since 1998 to over $139 per barrel, but Indian petrol prices have barely doubled. Left Front politicians, who once wanted to soak the rich, now want to subsidize them. Under-recoveries of oil companies’ total may be Rs. 2,00,000 crore, even after a recent price hike. This is far more than the cost of Sarva Shiksha Abhiyan (education for all) and the Employment Guarantee
Scheme put together.

We sanctimoniously lecture rich countries to reduce their green house emissions, yet subsidize our own. Diesel is subsidized to be cheaper than petrol. So, Indian car makers produce the highest proportion of diesel cars in the world. Diesel fumes contain suspended particles that are highly toxic. This subsidy kills.

So does kerosene provided at throwaway prices, ostensibly to benefit poor villagers. One third of all kerosene is used to adulterate petrol and diesel. This causes horrendous pollution even in the greenest of cars.

What’s the way forward? We must abolish subsidies and raise taxes on vehicles and fuels to reflect their full social cost. The biggest but least visible subsidy is for parking, and we should start there.

Many car owners in the West take public transport to work since parking space downtown is costly and scarce. We should levy parking fees on an hourly, not daily, basis. Rs. 10 per hour could be a starting point in the metros.

In parts of Tokyo, you cannot own a car unless you own a private parking space. This is too extreme for India, but indicates the future path. If we charge owners the full social cost of parking, people will buy smaller and perhaps fewer vehicles, and fewer still will take them to work. That will slash congestion and pollution.

Apart from underground rail, cities need elevated roads to ease congestion and pollution. Lata Mangeshkar helped kill a proposal for an elevated
road near her Mumbai flat: perhaps she felt her throat and singing would be affected. She did not care that the throats of poor people living on the pavements were far worse affected by fumes, and might get relief if some fumes were diverted to a higher level. What elitism!

Next, some medicine that will be really bitter, politically. The excise duty on all automotive vehicles should be raised to reflect their social costs. Fuel subsidies should be abolished. Price differentials between petrol, diesel and kerosene should be removed, ending incentives for adulteration. Diesel cars should bear a heavy additional cess to finance improved healthcare for those affected by their emission of harmful particulate matter.

That is a long, politically difficult agenda. Only part of it will ever be achieved. Yet that is the way to go, rather than agitate the Nano.

By ‘Sanctimonious greens’ the writer refers to


"Sanctimonious greens call the Nano disastrous because of its affordability - millions more will now clog roads and consume more fossil fuel. This is elitism parading as virtue."

It can be understood from the underlined portion of the above lines about the elitist and hypocritic attitudes of these environmentalists.

Since option C captures this essence most aptly, the correct option is C.


"Elite greens own cars, but cannot stand the poorer masses becoming mobile, since the consequent congestion will eat into the time of the elite!"

From the above lines, it can be inferred that the main issue for the elite with the poor getting more cars is the delay they have to face in travelling.

Thus, the correct option is C.

The paradox of the situation is that

Option A: Since it portrays a cause-effect situation, this is not the correct option.

Option B: This statement is also not contradictory as the proliferation of Nanos is bound to increase pollution.

Option C: Since, despite having more cars, London and New York are less polluted than Delhi, this statement has a paradox.

Thus, the correct option is C.

By mentioning the price of 23 sq m of land, the author is making a taunt on the current parking fee situation.

As the author's tone is sarcastic, the correct option is C.

The writer blames India for


"So does kerosene provided at throwaway prices, ostensibly to benefit poor villagers. One third of all kerosene is used to adulterate petrol and diesel. This causes horrendous pollution even in the greenest of cars."

This can be inferred from the above lines that the author blames India for subsidizing kerosene in lieu of helping the poor.

Thus, option A is the correct answer.