Six players - Tanzi, Umeza, Wangdu, Xyla, Yonita and Zeneca competed in an archery tournament. The tournament had three compulsory rounds, Rounds 1 to 3. In each round every player shot an arrow at a target. Hitting the centre of the target (called bull’s eye) fetched the highest score of 5. The only other possible scores that a player could achieve were 4, 3, 2 and 1. Every bull’s eye score in the first three rounds gave a player one additional chance to shoot in the bonus rounds, Rounds 4 to 6. The possible scores in Rounds 4 to 6 were identical to the first three.

A player’s total score in the tournament was the sum of his/her scores in all rounds played by him/her. The table below presents partial information on points scored by the players after completion of the tournament. In the table, NP means that the player did not participate in that round, while a hyphen means that the player participated in that round and the score information is missing.

What was Zeneca's total score?

Now from 1, Tanzi, Umeza and Yonita had the same total score.

Also it is given that total scores for all players, except one, were in multiples of three, so these three will have to be a multiple of 3.

Tabulating the data, we have

From 5, Tanzi and Zeneca had the same score in Round 1 but different scores in Round 3.

From 4, the number of players hitting bull’s eye in Round 2 was double of that in Round 3.

Hence this case is rejected.

In round 3, 2 Bull's eye can only be scored by Xyla and Umeza.

The highest scorer can be either Xyla or Zeneca. The lowest scorer will be Wangdu.

1.Consider Zeneca is the highest scorer.

But this will violate condition 2, since both Zeneca and Wangdu do not have their scores as multiples of three in this case.

Since Xyla already has non-multiple of 3 as total score. Zeneca will have 24 as the total score. The complete table is: 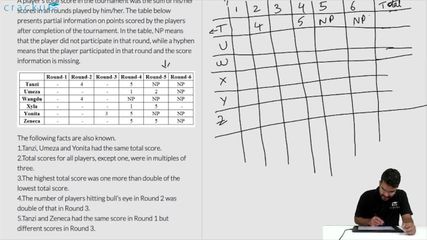