A flat plate is moving normal to its plane through a gas under the action of a constant force F. The gas is kept at a very low pressure. The speed of the plate v is much less than the average speed u of the gas molecules. Which of the following options is/are true?

A block of mass M has a circular cut with a frictionless surface as shown. The block rests on the horizontal frictionless surface of a fixed table. Initially the right edge of the block is at x = 0, in a co-ordinate system fixed to the table. A point mass m is released from rest at the topmost point of the path as shown and it slides down. When the mass loses contact with the block, its position is x and the velocity is v. At that instant, which of the following options is/are correct? 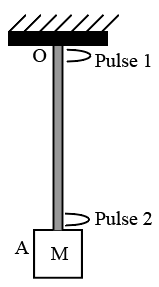 A circular insulated copper wire loop is twisted to form two loops of area 𝐴 and 2𝐴 as shown in the figure. At the point of crossing the wires remain electrically insulated from each other. The entire loop lies in the plane (of the paper). A uniform magnetic field 𝐵 points into the plane of the paper. At 𝑡 = 0, the loop starts rotating about the common diameter as axis with a constant angular velocity ω in the magnetic field. Which of the following options is/are correct? 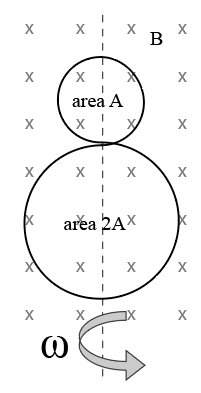 For an isosceles prism of angle 𝐴 and refractive index $$\mu$$, it is found that the angle of minimum deviation $$\delta_m = A$$. Which of the following options is/are correct?

A monochromatic light is travelling in a medium of refractive index n = 1.6. It enters a stack of glass layers from the bottom side at an angle $$\theta = 30^\circ$$. The interfaces of the glass layers are parallel to each other. The refractive indices of different glass layers are monotonically decreasing as $$n_m = n - m \triangle n$$, where $$n_m$$ is the refractive index of the $$m^{th}$$ slab and $$\triangle n = 0.1$$ (see the figure) The ray is refracted out parallel to the interface between the $$(m - 1)^{th}$$ and $$m^{th}$$ slabs from the right side of the stack. What is the value of m? 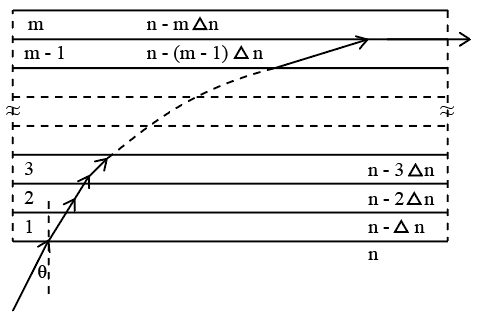