174 incidents of piracy were reported to the International Maritime Bureau last year, with Somali pirates responsible for only three. The rest ranged from the discreet theft of coils of rope in the Yellow Sea to the notoriously ferocious Nigerian gunmen attacking and hijacking oil tankers in the Gulf of Guinea, as well as armed robbery off Singapore and the Venezuelan coast and kidnapping in the Sundarbans in the Bay of Bengal. For [Dr. Peter] Lehr, an expert on modern-day piracy, the phenomenon’s history should be a source of instruction rather than entertainment, piracy past offering lessons for piracy present. . . .

But . . . where does piracy begin or end? According to St Augustine, a corsair captain once told Alexander the Great that in the forceful acquisition of power and wealth at sea, the difference between an emperor and a pirate was simply one of scale. By this logic, European empire-builders were the most successful pirates of all time. A more eclectic history might have included the conquistadors, Vasco da Gama and the East India Company. But Lehr sticks to the disorganized small fry, making comparisons with the renegades of today possible.

The main motive for piracy has always been a combination of need and greed. Why toil away as a starving peasant in the 16th century when a successful pirate made up to £4,000 on each raid? Anyone could turn to freebooting if the rewards were worth the risk . . . .

Increased globalisation has done more to encourage piracy than suppress it. European colonialism weakened delicate balances of power, leading to an influx of opportunists on the high seas. A rise in global shipping has meant rich pickings for freebooters. Lehr writes: “It quickly becomes clear that in those parts of the world that have not profited from globalisation and modernisation, and where abject poverty and the daily struggle for survival are still a reality, the root causes of piracy are still the same as they were a couple of hundred years ago.” . . .

Modern pirate prevention has failed. After the French yacht Le Gonant was ransomed for $2 million in 2008, opportunists from all over Somalia flocked to the coast for a piece of the action. . . . A consistent rule, even today, is there are never enough warships to patrol pirate-infested waters. Such ships are costly and only solve the problem temporarily; Somali piracy is bound to return as soon as the warships are withdrawn. Robot shipping, eliminating hostages, has been proposed as a possible solution; but as Lehr points out, this will only make pirates switch their targets to smaller carriers unable to afford the technology.

His advice isn’t new. Proposals to end illegal fishing are often advanced but they are difficult to enforce. Investment in local welfare put a halt to Malaysian piracy in the 1970s, but was dependent on money somehow filtering through a corrupt bureaucracy to the poor on the periphery. Diplomatic initiatives against piracy are plagued by mutual distrust: the Russians execute pirates, while the EU and US are reluctant to capture them for fear they’ll claim asylum.

The author ascribes the rise in piracy today to all of the following factors EXCEPT:


The author in the passage that. "surveillance is there, but they are costly and will never be enough to cover the entire sea" He nowhere mentions that surveillance has decreased, actually it is not possible to map the entire sea. Hence this option is incorrect. Remaining all the options are correct. 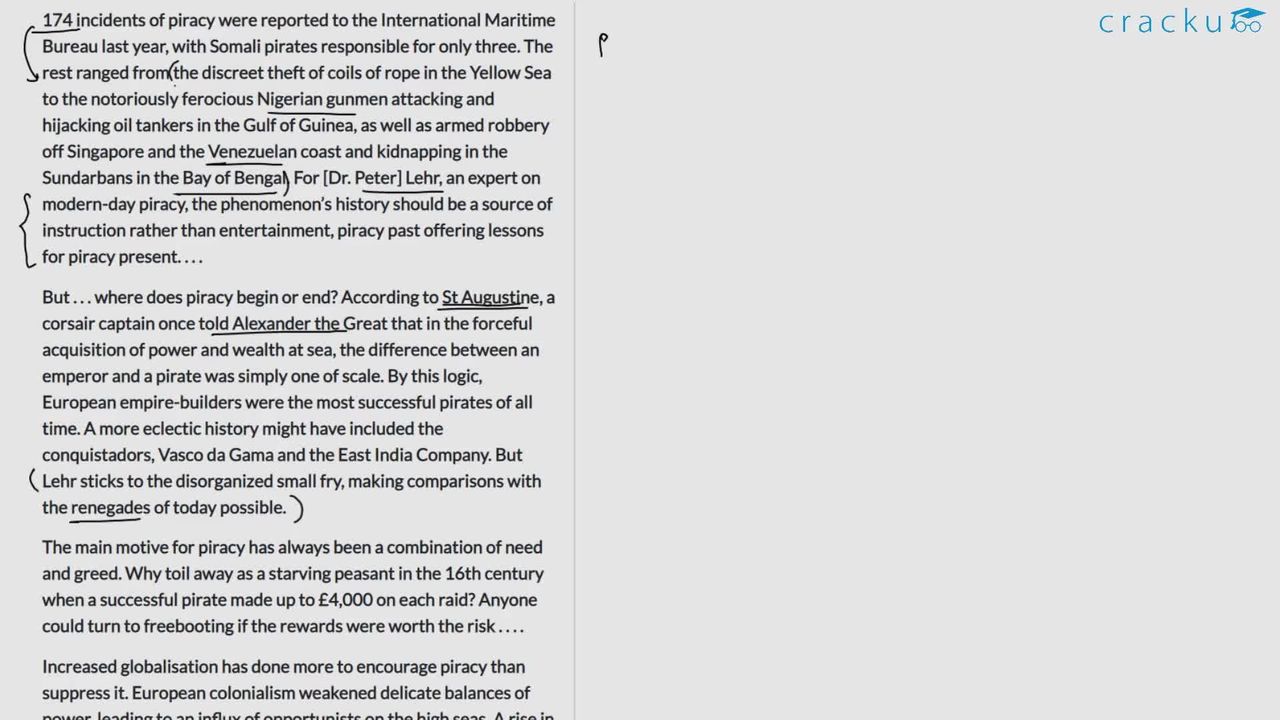