Aggression is any behavior that is directed toward injuring, harming, or inflicting pain on another living being or group of beings. Generally, the victim(s) of aggression must wish to avoid such behavior in order for it to be considered true aggression. Aggression is also categorized according to its ultimate intent. Hostile aggression is an aggressive act that results from anger, and is intended to inflict pain or injury because of that anger. Instrumental aggression is an aggressive act that is regarded as a means to an end other than pain or injury. For example, an enemy combatant may be subjected to torture in order to extract useful intelligence, though those inflicting the torture may have no real feelings of anger or animosity toward their subject. The concept of aggression is very broad, and includes many categories of behavior (e.g., verbal aggression, street crime, child abuse, spouse abuse, group conflict, war, etc.). A number of theories and models of aggression have arisen to explain these diverse forms of behavior, and these theories/models tend to be categorized according to their specific focus. The most common system of categorization groups the various approaches to aggression into three separate areas, based upon the three key variables that are present whenever any aggressive act or set of acts is committed. The first variable is the aggressor him/herself. The second is the social situation or circumstance in which the aggressive act(s) occur. The third variable is the target or victim of aggression.

Regarding theories and research on the aggressor, the fundamental focus is on the factors that lead an individual (or group) to commit aggressive acts. At the most basic level, some argue that aggressive urges and actions are the result of inborn, biological factors. Sigmund Freud (1930) proposed that all individuals are born with a death instinct that predisposes us to a variety of aggressive behaviors, including suicide (self directed aggression) and mental illness (possibly due to an unhealthy or unnatural suppression of aggressive urges). Other influential perspectives supporting a biological basis for aggression conclude that humans evolved with an abnormally low neural inhibition of aggressive impulses (in comparison to other species), and that humans possess a powerful instinct for property accumulation and territorialism. It is proposed that this instinct accounts for hostile behaviors ranging from minor street crime to world wars. Hormonal factors also appear to play a significant role in fostering aggressive tendencies. For example, the hormone testosterone has been shown to increase aggressive behaviors when injected into animals. Men and women convicted of violent crimes also possess significantly higher levels of testosterone than men and women convicted of non violent crimes. Numerous studies comparing different age groups, racial/ethnic groups, and cultures also indicate that men, overall, are more likely to engage in a variety of aggressive behaviors (e.g., sexual assault, aggravated assault, etc.) than women. One explanation for higher levels of aggression in men is based on the assumption that, on average, men have higher levels of testosterone than women.

All of the following statements can be seen as logically implied by the arguments of the passage EXCEPT:


Look at the last paragraph of the passage," Other influential perspectives supporting a biological basis for aggression conclude that humans evolved with an abnormally low neural inhibition of aggressive impulses". While the first option talks about neural regulation of testosterone, which is factually incorrect. Hence this is the answer. 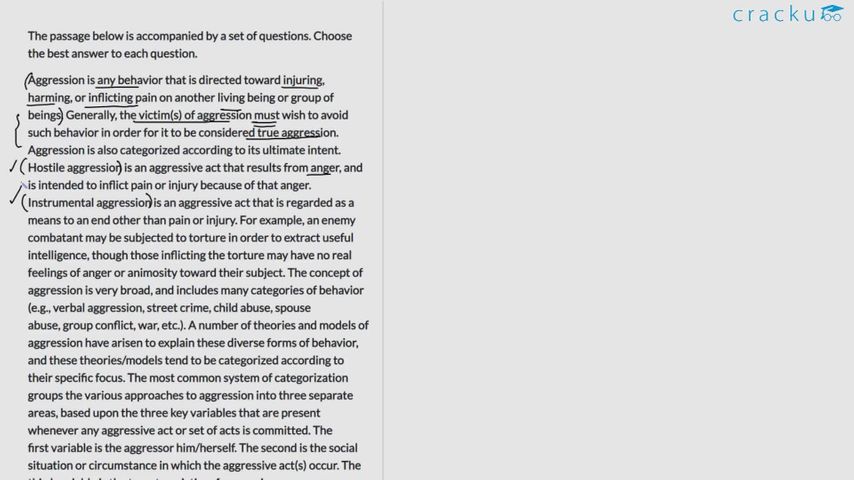