Today we can hardly conceive of ourselves without an unconscious. Yet between 1700 and 1900, this notion developed as a genuinely original thought. The “unconscious” burst the shell of conventional language, coined as it had been to embody the fleeting ideas and the shifting conceptions of several generations until, finally, it became fixed and defined in specialized terms within the realm of medical psychology and Freudian psychoanalysis.

The vocabulary concerning the soul and the mind increased enormously in the course of the nineteenth century. The enrichments of literary and intellectual language led to an altered understanding of the meanings that underlie time-honored expressions and traditional catchwords. At the same time, once coined, powerful new ideas attracted to themselves a whole host of seemingly unrelated issues, practices, and experiences, creating a peculiar network of preoccupations that as a group had not existed before. The drawn-out attempt to approach and define the unconscious brought together the spiritualist and the psychical researcher of borderline phenomena (such as apparitions, spectral illusions, haunted houses, mediums, trance, automatic writing); the psychiatrist or alienist probing the nature of mental disease, of abnormal ideation, hallucination, delirium, melancholia, mania; the surgeon performing operations with the aid of hypnotism; the magnetizer claiming to correct the disequilibrium in the universal flow of magnetic fluids but who soon came to be regarded as a clever manipulator of the imagination; the physiologist and the physician who puzzled over sleep, dreams, sleepwalking, anesthesia, the influence of the mind on the body in health and disease; the neurologist concerned with the functions of the brain and the physiological basis of mental life; the philosopher interested in the will, the emotions, consciousness, knowledge, imagination and the creative genius; and, last but not least, the psychologist.

Significantly, most if not all of these practices (for example, hypnotism in surgery or psychological magnetism) originated in the waning years of the eighteenth century and during the early decades of the nineteenth century, as did some of the disciplines (such as psychology and psychical research). The majority of topics too were either new or assumed hitherto unknown colors. Thus, before 1790, few if any spoke, in medical terms, of the affinity between creative genius and the hallucinations of the insane . . .

Striving vaguely and independently to give expression to a latent conception, various lines of thought can be brought together by some novel term. The new concept then serves as a kind of resting place or stocktaking in the development of ideas, giving satisfaction and a stimulus for further discussion or speculation. Thus, the massive introduction of the term unconscious by Hartmann in 1869 appeared to focalize many stray thoughts, affording a temporary feeling that a crucial step had been taken forward, a comprehensive knowledge gained, a knowledge that required only further elaboration, explication, and unfolding in order to bring in a bounty of higher understanding. Ultimately, Hartmann’s attempt at defining the unconscious proved fruitless because he extended its reach into every realm of organic and inorganic, spiritual, intellectual, and instinctive existence, severely diluting the precision and compromising the impact of the concept.

“The enrichments of literary and intellectual language led to an altered understanding of the meanings that underlie time-honored expressions and traditional catchwords.” Which one of the following interpretations of this sentence would be closest in meaning to the original?


Let us try to break the sentence down and interpret its meaning:

“The enrichments of literary and intellectual language led to an altered understanding of the meanings that underlie time-honored expressions and traditional catchwords.”

In simple words |Enrichments of language| led to |change in understanding| of | time-honoured expressions|.

In the context of the passage, the line means that when the terms related to 'the unconscious' were coined, they enriched the vocabulary of the language and this, in turn, changes the meanings of many old expressions related to this term.

Option D comes the closest in capturing the meaning, and hence, is the answer.

B: The meanings of the catchwords were altered. They were not enriched. Can be eliminated.

C: The catchwords did not cause a change. Their own meaning was changed. Can be eliminated. 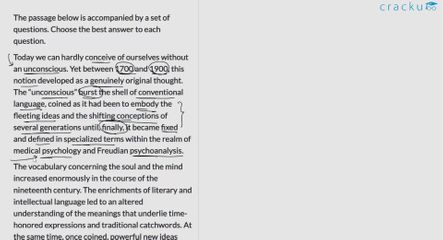