Few realise that the government of China, governing an empire of some 60 million people during the Tang dynasty (618-907), implemented a complex financial system that recognised grain, coins and textiles as money. . . . Coins did have certain advantages: they were durable, recognisable and provided a convenient medium of exchange, especially for smaller transactions. However, there were also disadvantages. A continuing shortage of copper meant that government mints could not produce enough coins for the entire empire, to the extent that for most of the dynasty’s history, coins constituted only a tenth of the money supply. One of the main objections to calls for taxes to be paid in coin was that peasant producers who could weave cloth or grow grain - the other two major currencies of the Tang - would not be able to produce coins, and therefore would not be able to pay their taxes. . . .

As coins had advantages and disadvantages, so too did textiles. If in circulation for a long period of time, they could show signs of wear and tear. Stained, faded and torn bolts of textiles had less value than a brand new bolt. Furthermore, a full bolt had a particular value. If consumers cut textiles into smaller pieces to buy or sell something worth less than a full bolt, that, too, greatly lessened the value of the textiles. Unlike coins, textiles could not be used for small transactions; as [an official] noted, textiles could not “be exchanged by the foot and the inch” . . .

But textiles had some advantages over coins. For a start, textile production was widespread and there were fewer problems with the supply of textiles. For large transactions, textiles weighed less than their equivalent in coins since a string of coins . . . could weigh as much as 4 kg. Furthermore, the dimensions of a bolt of silk held remarkably steady from the third to the tenth century: 56 cm wide and 12 m long . . . The values of different textiles were also more stable than the fluctuating values of coins. . . .

The government also required the use of textiles for large transactions. Coins, on the other hand, were better suited for smaller transactions, and possibly, given the costs of transporting coins, for a more local usage. Grain, because it rotted easily, was not used nearly as much as coins and textiles, but taxpayers were required to pay grain to the government as a share of their annual tax obligations, and official salaries were expressed in weights of grain. . . .

In actuality, our own currency system today has some similarities even as it is changing in front of our eyes. . . . We have cash - coins for small transactions like paying for parking at a meter, and banknotes for other items; cheques and debit/credit cards for other, often larger, types of payments. At the same time, we are shifting to electronic banking and making payments online. Some young people never use cash [and] do not know how to write a cheque . . .

During the Tang period, which one of the following would not be an economically sound decision for a small purchase in the local market that is worth one-eighth of a bolt of cloth?


Options A and C are economically sound decisions. Option B might be a viable choice, as well. However, Option D would not be an economically sound decision for a small purchase in the local market that is worth one-eighth of a bolt of cloth. Concerning small transactions, the author highlights the limitations that stemmed from a textile form of currency: "...Furthermore, a full bolt had a particular value. If consumers cut textiles into smaller pieces to buy or sell something worth less than a full bolt, that, too, greatly lessened the value of the textiles..." Thus, cutting the cloth would greatly diminish its value {and consequently cannot be considered as a sensible decision}. Hence, Option D is the correct answer. 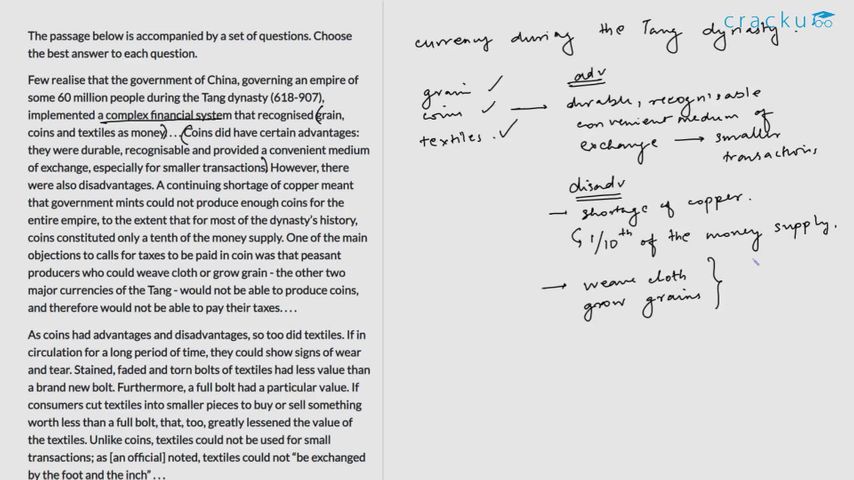