Contemporary internet shopping conjures a perfect storm of choice anxiety. Research has consistently held that people who are presented with a few options make better, easier decisions than those presented with many. . . . Helping consumers figure out what to buy amid an endless sea of choice online has become a cottage industry unto itself. Many brands and retailers now wield marketing buzzwords such as curation, differentiation, and discovery as they attempt to sell an assortment of stuff targeted to their ideal customer. Companies find such shoppers through the data gold mine of digital advertising, which can catalog people by gender, income level, personal interests, and more. Since Americans have lost the ability to sort through the sheer volume of the consumer choices available to them, a ghost now has to be in the retail machine, whether it’s an algorithm, an influencer, or some snazzy ad tech to help a product follow you around the internet. Indeed, choice fatigue is one reason so many people gravitate toward lifestyle influencers on Instagram—the relentlessly chic young moms and perpetually vacationing 20-somethings—who present an aspirational worldview, and then recommend the products and services that help achieve it. . . .

For a relatively new class of consumer-products start-ups, th ere’s another method entirely. Instead of making sense of a sea of existing stuff, these companies claim to disrupt stuff as Americans know it. Casper (mattresses), Glossier (makeup), Away (suitcases), and many others have sprouted up to offer consumers freedom from choice: The companies have a few aesthetically pleasing and supposedly highly functional options, usually at mid-range prices. They’re selling nice things, but maybe more importantly, they’re selling a confidence in those things, and an ability to opt out of the stuff rat race. . . .

One-thousand-dollar mattresses and $300 suitcases might solve choice anxiety for a certain tier of consumer, but the companies that sell them, along with those that attempt to massage the larger stuff economy into something navigable, are still just working within a consumer market that’s broken in systemic ways. The presence of so much stuff in America might be more valuable if it were more evenly distributed, but stuff’s creators tend to focus their energy on those who already have plenty. As options have expanded for people with disposable income, the opportunity to buy even basic things such as fresh food or quality diapers has contracted for much of America’s lower classes.

For start-ups that promise accessible simplicity, their very structure still might eventually push them toward overwhelming variety. Most of these companies are based on hundreds of millions of dollars of venture capital, the investors of which tend to expect a steep growth rate
that can’t be achieved by selling one great mattress or one great sneaker. Casper has expanded into bedroom furniture and bed linens. Glossier, after years of marketing itself as no-makeup makeup that requires little skill to apply, recently launched a full line of glittering color cosmetics. There may be no way to opt out of stuff by buying into the right thing.

All of the following, IF TRUE, would weaken the author’s claims EXCEPT:


Option A: Paragraph 1 says "choice fatigue is one reason so many people gravitate toward lifestyle influencers on Instagram". Hence, as per the passage, a company with wide range of products and a lifestyle influencer is likely to perform better than a company with only wide range of products. Hence, this statement negates the claim of the author.

Option B: "As options have expanded for people with disposable income, the opportunity to buy even basic things such as fresh food or quality diapers has contracted for much of America’s lower classes." The author argues that variety of products are offered only for a certain class of consumers other than the lower class. If variety of options indeed helped the poor, then his argument is weakened.

Option C: "Research has consistently held that people who are presented with a few options make better, easier decisions than those presented with many". "Americans have lost the ability to sort through the sheer volume". Clearly, people are overwhelmed by options and prefer lesser variety. Hence, option C is contradictory.

Option D: This option is largely vague and leaves unanswered questions behind. Also, the author doesn't make any comparison between the growth of these two type of companies. The author only says that, as the company targets only few consumers, for the want of growth they are likely to expand to variety of products. As there is no information about their growths, this option neither strengthens nor weakens the claim. 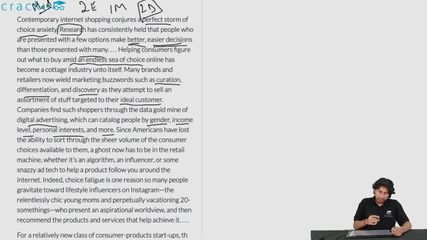