The word ‘anarchy’ comes from the Greek 'anarkhia', meaning contrary to authority or without a ruler, and was used in a derogatory sense until 1840, when it was adopted by Pierre-Joseph Proudhon to describe his political and social ideology. Proudhon argued that organization without government was both possible and desirable. In the evolution of political ideas, anarchism can be seen as an ultimate projection of both liberalism and socialism, and the differing strands of anarchist thought can be related to their emphasis on one or the other of these.

Historically, anarchism arose not only as an explanation of the gulf between the rich and the poor in any community, and of the reason why the poor have been obliged to fight for their share of a common inheritance, but as a radical answer to the question ‘What went wrong?’ that followed the ultimate outcome of the French Revolution. It had ended not only with a reign of terror and the emergence of a newly rich ruling caste, but with a new adored emperor, Napoleon Bonaparte, strutting through his conquered territories.

The anarchists and their precursors were unique on the political Left in affirming that workers and peasants, grasping the chance that arose to bring an end to centuries of exploitation and tyranny, were inevitably betrayed by the new class of politicians, whose first priority was to re-establish a centralized state power. After every revolutionary uprising, usually won at a heavy cost for ordinary populations, the new rulers had no hesitation in applying violence and terror, a secret police, and a professional army to maintain their control.

For anarchists the state itself is the enemy, and they have applied the same interpretation to the outcome of every revolution of the 19th and 20th centuries. This is not merely because every state keeps a watchful and sometimes punitive eye on its dissidents, but because every state protects the privileges of the powerful.

The mainstream of anarchist propaganda for more than a century has been anarchist- communism, which argues that property in land, natural resources, and the means of production should be held in mutual control by local communities, federating for innumerable joint purposes with other communes. It differs from state socialism in opposing the concept of any central authority. Some anarchists prefer to distinguish between anarchist-communism and collectivist anarchism in order to stress the obviously desirable freedom of an individual or family to possess the resources needed for living, while not implying the right to own the resources needed by others. . . .

There are, unsurprisingly, several traditions of individualist anarchism, one of them deriving from the ‘conscious egoism’ of the German writer Max Stirner (1806-56), and another from a remarkable series of 19th-century American figures who argued that in protecting our own autonomy and associating with others for common advantages, we are promoting the good of all. These thinkers differed from free-market liberals in their absolute mistrust of American capitalism, and in their emphasis on mutualism.

Of the following sets of concepts, identify the set that is conceptually closest to the concerns of the passage.


One has to be mindful of the question:  the set that is conceptually closest to the concerns of the passage.

The passage is clearly about 'Anarchism', and the discussion pertaining to 'Revolution' is a sub-element. This elementary understanding helps us pare down the viable choices to Options A and D. 'Betrayal' is again a minor sub-element used to supplement the core argument concerning the authority of the 'State' and the justified antagonism of the anarchists towards it. Additionally, towards the end of the discussion, individual autonomy and freedom serve as the focal points. Thus, of the two likely choices, Option A is more appropriate and conceptually closest to the concerns of the passage. 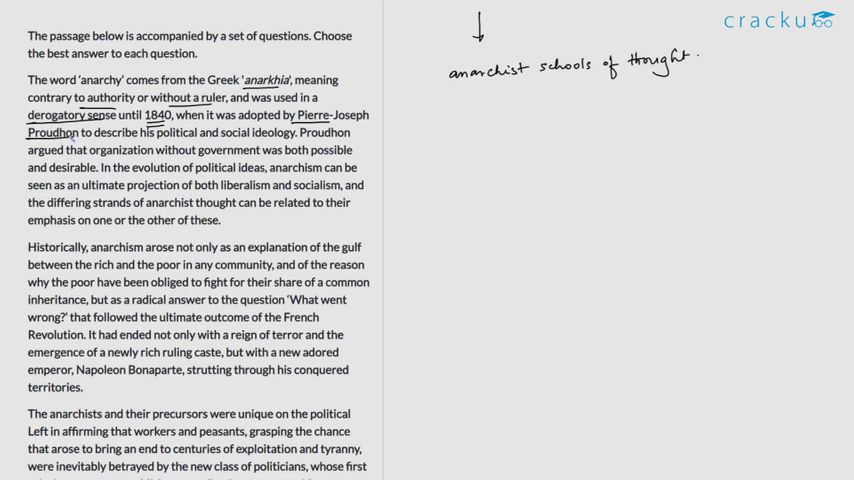