As defined by the geographer Yi-Fu Tuan, topophilia is the affective bond between people and place. His 1974 book set forth a wide-ranging exploration of how the emotive ties with the material environment vary greatly from person to person and in intensity, subtlety, and mode of expression. Factors influencing one’s depth of response to the environment include cultural background, gender, race, and historical circumstance, and Tuan also argued that there is a biological and sensory element. Topophilia might not be the strongest of human emotions—
indeed, many people feel utterly indifferent toward the environments that shape their lives - but when activated it has the power to elevate a place to become the carrier of emotionally charged events or to be perceived as a symbol.

Aesthetic appreciation is one way in which people respond to the environment. A brilliantly colored rainbow after gloomy afternoon showers, a busy city street alive with human interaction—one might experience the beauty of such landscapes that had seemed quite ordinary only moments before or that are being newly discovered. This is quite the opposite of a second topophilic bond, namely that of the acquired taste for certain landscapes and places that one knows well. When a place is home, or when a space has become the locus of memories or the means of gaining a livelihood, it frequently evokes a deeper set of attachments than those predicated purely on the visual. A third response to the environment
also depends on the human senses but may be tactile and olfactory, namely a delight in the feel and smell of air, water, and the earth.

Topophilia—and its very close conceptual twin, sense of place—is an experience that, however elusive, has inspired recent architects and planners. Most notably, new urbanism seeks to counter the perceived placelessness of modern suburbs and the decline of central cities through neo-traditional design motifs. Although motivated by good intentions, such attempts to create places rich in meaning are perhaps bound to disappoint. As Tuan noted, purely aesthetic responses often are suddenly revealed, but their intensity rarely is longlasting. Topophilia is difficult to design for and impossible to quantify, and its most articulate interpreters have been self-reflective philosophers such as Henry David Thoreau, evoking a marvelously intricate sense of place at Walden Pond, and Tuan, describing his deep affinity for the desert.

Topophilia connotes a positive relationship, but it often is useful to explore the darker affiliations between people and place. Patriotism, literally meaning the love of one’s terra patria or homeland, has long been cultivated by governing elites for a range of nationalist projects, including war preparation and ethnic cleansing. Residents of upscale residential developments have disclosed how important it is to maintain their community’s distinct identity, often by casting themselves in a superior social position and by reinforcing class and racial differences. And just as a beloved landscape is suddenly revealed, so too may landscapes of fear cast a dark shadow over a place that makes one feel a sense of dread or anxiety—or topophobia.

In the last paragraph, the author uses the example of “Residents of upscale residential developments” to illustrate the:


"Residents of upscale residential developments have disclosed how important it is to maintain their community’s distinct identity, often by casting themselves in a superior social position and by reinforcing class and racial differences."

Option A: The option implies that the clients are made to feel at home. While the phrase “Residents of upscale residential developments” is used to capture the intent of social dominance of a particular class. Hence this option is incorrect.

Option B: The option implies that jingoism of a certain class might lead to topophobia. The option is yet again unrelated.

Option C: Residents of upscale residential developments intend to promote their community by reinforcing sectarian differences. This exclusivism(Practice of being exclusive/important) is clearly captured in the option. Hence C is correct. 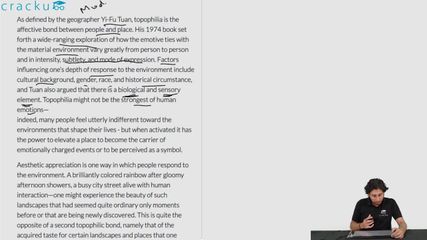