Scientists recently discovered that Emperor Penguins—one of Antarctica’s most celebrated species—employ a particularly unusual technique for surviving the daily chill. As detailed in an article published today in the journal Biology Letters, the birds minimize heat loss by keeping
the outer surface of their plumage below the temperature of the surrounding air. At the same time, the penguins’ thick plumage insulates their body and keeps it toasty. . . .

The researchers analyzed thermographic images . . . taken over roughly a month during June 2008. During that period, the average air temperature was 0.32 degrees Fahrenheit. At the same time, the majority of the plumage covering the penguins’ bodies was even colder: the surface of their warmest body part, their feet, was an average 1.76 degrees Fahrenheit, but the plumage on their heads, chests and backs were -1.84, -7.24 and -9.76 degrees Fahrenheit respectively. Overall, nearly the entire outer surface of the penguins’ bodies was below freezing at all times, except for their eyes and beaks. The scientists also used a computer simulation to determine how much heat was lost or gained from each part of the
body - and discovered that by keeping their outer surface below air temperature, the birds might paradoxically be able to draw very slight amounts of heat from the air around them. The key to their trick is the difference between two different types of heat transfer: radiation and
convection.

The penguins do lose internal body heat to the surrounding air through thermal radiation, just as our bodies do on a cold day. Because their bodies (but not surface plumage) are warmer than the surrounding air, heat gradually radiates outward over time, moving from a warmer material to a colder one. To maintain body temperature while losing heat, penguins, like all warm-blooded animals, rely on the metabolism of food. The penguins, though, have an additional strategy. Since their outer plumage is even colder than the air, the simulation showed that they might gain back a little of this heat through thermal convection—the transfer of heat via the movement of a fluid (in this case, the air). As the cold Antarctic air cycles around their bodies, slightly warmer air comes into contact with the plumage and donates minute amounts of heat back to the penguins, then cycles away at a slightly colder temperature.

Most of this heat, the researchers note, probably doesn’t make it all the way through the plumage and back to the penguins’ bodies, but it could make a slight difference. At the very least, the method by which a penguin’s plumage wicks heat from the bitterly cold air that surrounds it helps to cancel out some of the heat that’s radiating from its interior. And given the Emperors’ unusually demanding breeding cycle, every bit of warmth counts. . . . Since [penguins trek as far as 75 miles to the coast to breed and male penguins] don’t eat anything during [the incubation period of 64 days], conserving calories by giving up as little heat as possible is absolutely crucial.

Which of the following can be responsible for Emperor Penguins losing body heat?


Option A: It has been mentioned that food metabolism is used to maintain body temperature. But it cannot be inferred that heat is lost due to food metabolism.

Option B: The colder temperature of plumage results in slight heat gain from the surrounding air. Hence this option is incorrect. 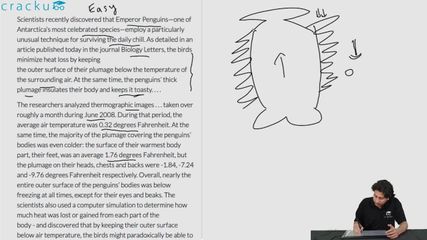