Mode of transportation affects the travel experience and thus can produce new types of travel writing and perhaps even new “identities.” Modes of transportation determine the types and duration of social encounters; affect the organization and passage of space and time; . . . and also affect perception and knowledge—how and what the traveler comes to know and write about. The completion of the first U.S. transcontinental highway during the 1920s . . . for example, inaugurated a new genre of travel literature about the United States—the automotive or road narrative. Such narratives highlight the experiences of mostly male protagonists “discovering themselves” on their journeys, emphasizing the independence of road travel and the value of rural folk traditions.

Travel writing’s relationship to empire building— as a type of “colonialist discourse”—has drawn the most attention from academicians. Close connections have been observed between European (and American) political, economic, and administrative goals for the colonies and their manifestations in the cultural practice of writing travel books. Travel writers’ descriptions of foreign places have been analyzed as attempts to validate, promote, or challenge the ideologies and practices of colonial or imperial domination and expansion. Mary Louise Pratt’s study of the genres and conventions of 18th- and 19th-century exploration narratives about South America and Africa (e.g., the “monarch of all I survey” trope) offered ways of thinking about travel writing as embedded within relations of power between metropole and periphery, as did Edward Said’s theories of representation and cultural imperialism. Particularly Said’s book, Orientalism, helped scholars understand ways in which representations of people in travel texts were intimately bound up with notions of self, in this case, that the Occident defined itself through essentialist, ethnocentric, and racist representations of the Orient. Said’s work became a model for demonstrating cultural forms of imperialism in travel texts, showing how the political, economic, or administrative fact of dominance relies on legitimating discourses such as those articulated through travel writing. . . .

Feminist geographers’ studies of travel writing challenge the masculinist history of geography by questioning who and what are relevant subjects of geographic study and, indeed, what counts as geographic knowledge itself. Such questions are worked through ideological constructs that posit men as explorers and women as travelers—or, conversely, men as travelers and women as tied to the home. Studies of Victorian women who were professional travel writers, tourists, wives of colonial administrators, and other (mostly) elite women who wrote narratives about their experiences abroad during the 19th century have been particularly revealing. From a “liberal” feminist perspective, travel presented one means toward female liberation for middle- and upper-class Victorian women. Many studies from the 1970s onward demonstrated the ways in which women’s gendered identities were negotiated differently “at home” than they were “away,” thereby showing women’s self-development through travel. The more recent post structural turn in studies of Victorian travel writing has focused attention on women’s diverse and fragmented identities as they narrated their travel experiences, emphasizing women’s sense of themselves as women in new locations, but only as they worked through their ties to nation, class, whiteness, and colonial and imperial power structures

From the passage, we can infer that feminist scholars’ understanding of the experiences of Victorian women travellers is influenced by all of the following EXCEPT scholars':


The aspects that guided/influenced the understanding of feminist scholars who examined Victorian women's travelling experiences need to be found out. We understand that the attempt made by feminist scholars was to "challenge the masculinist history of geography by (1) questioning who and what are relevant subjects of geographic study, and (2) what counts as geographic knowledge itself." And considering the role of women in travel writing during the Victorian era enabled these scholars to inspect new perspectives and achieve the aforementioned objectives {"...such questions are worked through ideological constructs that posit men as explorers and women as travelers—or, conversely, men as travelers and women as tied to the home..."}[Option C]. The varied viewpoints offered by women during this period originated from the difference in the gendered identities, implicitly indicating that the presence of an inequality/ineuity in the gender roles [Option A]. Additionally, studies concerning the manner in which travel altered a woman's gendered identities were also available; this further shaped the feminist scholars'  understanding of the travelling experiences of Victorian women [Option D]. It has not been presented or implied that the knowledge of "class" tensions, as stated in Option B, was an imperative element that influenced scholars' understanding. Hence, Option B is the correct answer. 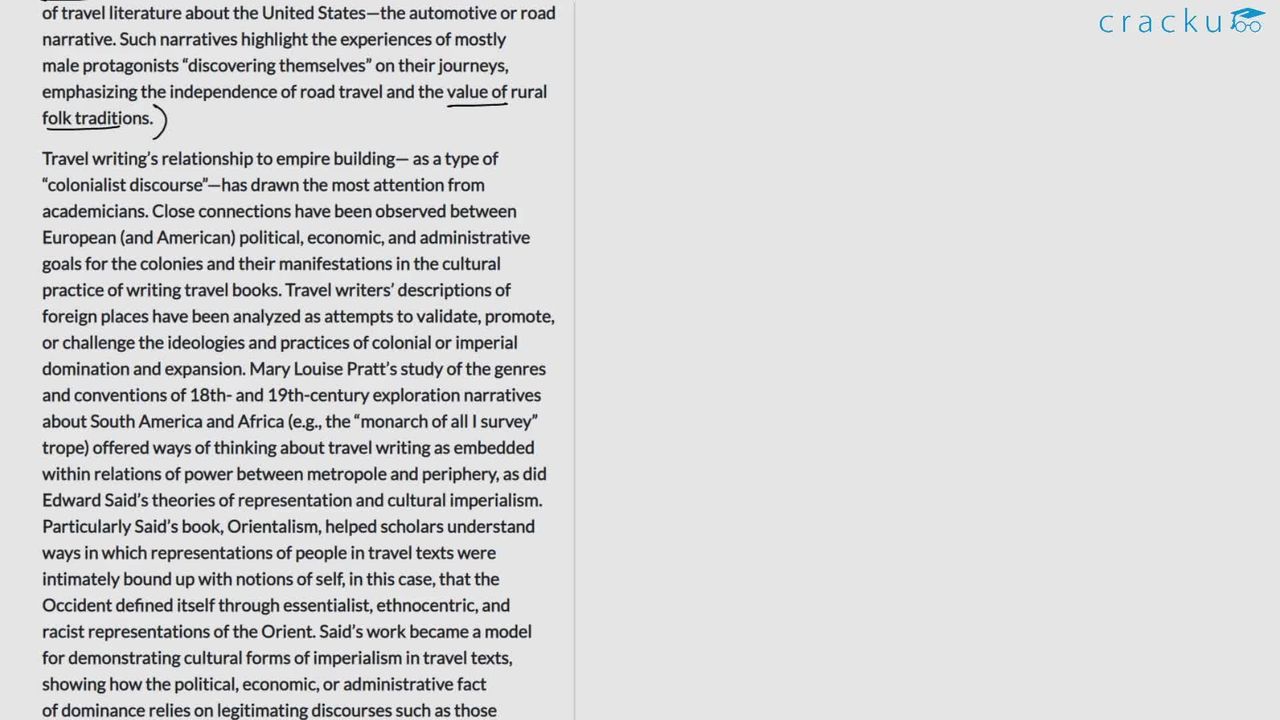