Every age has its pet contradictions. A few decades back, we used to accept Marx and Freud together, and then wonder, like the chameleon on the turkey carpet, why life was so confusing. Today there is similar trouble over the question whether there is, or is not, something called Human Nature. On the one hand, there has been an explosion of animal behavior studies, and comparisons between animals and men have become immensely popular. People use evidence from animals to decide whether man is naturally aggressive, or naturally territorial; even whether he has an aggressive or territorial instinct. Moreover, we are still much influenced by Freudian psychology, which depends on the notion of instinct. On the other hand, many still hold what may be called the Blank Paper view, that man is a creature entirely without instincts. So do Existentialist philosophers. If man has no instincts, all comparison with animals must be irrelevant. (Both these simple party lines have been somewhat eroded over time, but both are still extremely influential.)

According to the Blank Paper view, man is entirely the product of his culture. He starts off infinitely plastic, and is formed completely by the society in which he grows up. There is then no end to the possible variations among cultures; what we take to be human instincts are just the deep-dug prejudices of our own society. Forming families, fearing the dark, and jumping at the sight of a spider are just results of our conditioning. Existentialism at first appears a very different standpoint, because the Existentialist asserts man’s freedom and will not let him call himself a product of anything. But Existentialism too denies that man has a nature; if he had, his freedom would not be complete. Thus Sartre insisted that “there is no human nature …. Man first of all exists, encounters himself, surges up in the world, and defines himself afterwards. If man as the Existentialist sees him is not definable, it is because to begin with he is nothing. He will not be anything until later, and then he will be what he makes himself.” For Existentialism there is only the human condition, which is what happens to man and not what he is born like. If we are afraid of the dark, it is because we choose to be cowards; if we care more for our own children than for other people’s, it is because we choose to be partial. We must never talk about human nature or human instincts. This implicit moral notion is still very influential, not at all confined to those who use the metaphysic of essence and existence. So I shall sometimes speak of it, not as Existentialist, but as Libertarian ― meaning that those holding it do not just (like all of us) think liberty important, but think it supremely important and believe that our having a nature would infringe it.

Philosophers have not yet made much use of informed comparison with other species as a help in the understanding of man. One reason they have not is undoubtedly the fear of fatalism. Another is the appalling way terms such as instinct and human nature have been misused in the past. A third is the absurdity of some ethological propaganda.

A business school led by an existentialist director, wanted to decide on admission policy for its executive MBA program, which requires candidates to possess minimum five years of managerial experience.

With respect to the selection process, which of the following statements will be closest to the director’s belief:


The author says that, "Existentialist asserts man’s freedom and will not let him call himself a product of anything. But Existentialism too denies that man has a nature".

Essentially, we evaluate the past credentials or achievements to guage the tendencies or nature of an individual. As per an exitentialist, humans have absolute freedom and their experiences in certain exams cannot be used to define them.

The author also says, "For Existentialism there is only the human condition, which is what happens to man and not what he is born like. We must never talk about human nature or human instincts.". This implies that the current state of human condition is the only thing that matters and we shouldn't look at one's historical achievements or performances to understand their nature because we do not have a nature. We only have the present human condition.

An easiest way to define the current human condition would be to use the most recent experience or something that is ongoing i.e. current form of work. Hence, among the given options, A is the most suitable 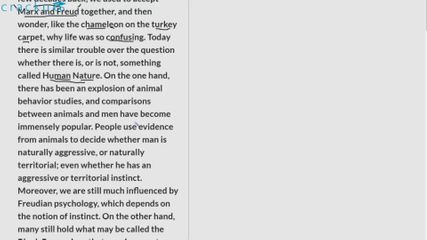