Back in the early 2000s, an awesome thing happened in the New X-Men comics. Our mutant heroes had been battling giant robots called Sentinels for years, but suddenly these mechanical overlords spawned a new threat: Nano-Sentinels! Not content to rule Earth with their metal fists, these tiny robots invaded our bodies at the microscopic level. Infected humans were slowly converted into machines, cell by cell.

Now, a new wave of extremely odd robots is making at least part of the Nano-Sentinels story come true. Using exotic fabrication materials like squishy hydrogels and elastic polymers, researchers are making autonomous devices that are often tiny and that could turn out to be more powerful than an army of Terminators. Some are 1-centimetre blobs that can skate over water. Others are flat sheets that can roll themselves into tubes, or matchstick-sized plastic coils that act as powerful muscles. No, they won’t be invading our bodies and turning us into Sentinels - which I personally find a little disappointing - but some of them could one day swim through our bloodstream to heal us. They could also clean up pollutants in water or fold themselves into different kinds of vehicles for us to drive. . . .

Unlike a traditional robot, which is made of mechanical parts, these new kinds of robots are made from molecular parts. The principle is the same: both are devices that can move around and do things independently. But a robot made from smart materials might be nothing more than a pink drop of hydrogel. Instead of gears and wires, it’s assembled from two kinds of molecules - some that love water and some that avoid it - which interact to allow the bot to skate on top of a pond.

Sometimes these materials are used to enhance more conventional robots. One team of researchers, for example, has developed a different kind of hydrogel that becomes sticky when exposed to a low-voltage zap of electricity and then stops being sticky when the electricity is switched off. This putty-like gel can be pasted right onto the feet or wheels of a robot. When the robot wants to climb a sheer wall or scoot across the ceiling, it can activate its sticky feet with a few volts. Once it is back on a flat surface again, the robot turns off the adhesive like a light switch.

Robots that are wholly or partly made of gloop aren’t the future that I was promised in science fiction. But it’s definitely the future I want. I’m especially keen on the nanometre-scale “soft robots” that could one day swim through our bodies. Metin Sitti, a director at the Max Planck Institute for Intelligent Systems in Germany, worked with colleagues to prototype these tiny, synthetic beasts using various stretchy materials, such as simple rubber, and seeding them with magnetic microparticles. They are assembled into a finished shape by applying magnetic fields. The results look like flowers or geometric shapes made from Tinkertoy ball and stick modelling kits. They’re guided through tubes of fluid using magnets, and can even stop and cling to the sides of a tube.

Which one of the following statements best captures the sense of the first paragraph?


Back in the early 2000s, an awesome thing happened in the New X-Men comics. Our mutant heroes had been battling giant robots called Sentinels for years, but suddenly these mechanical overlords spawned a new threat: Nano-Sentinels! Not content to rule Earth with their metal fists, these tiny robots invaded our bodies at the microscopic level. Infected humans were slowly converted into machines, cell by cell.

The first paragraph talks about the X-men comics, in which the mutant heroes, that X-Men, has been battling giant robots called sentinels. But these Sentinels then developed Nano-Sentinels, which could invade bodies at the microscopic level, and the heroes would now have to fight them too. Option D perfectly captures this, and hence, is the answer.

Option A is incorrect. X-men were battling the Sentinels before the invention of Nano-Sentinels. Hence, the origin of X-men is different.

Option B is incorrect. The mechanical overlords made Nano-Sentinels to convert people into machines. It has not been said that the people were converted into the mechanical lords themselves. 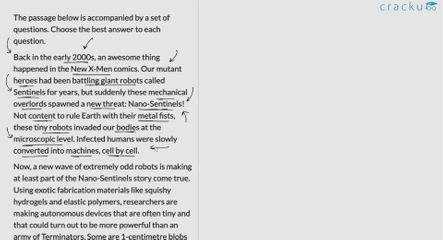