Select the correct combination of mathematical signs that can sequentially replace the * signs and balance the equation.
60 * 2 * 3 * 6 * 5 * 43

Select the option in which the numbers are related in the same way as are thenumbers of the following set.
(24, 10, 392)

The sequence of folding a piece of paper and the manner in which the folded paper has been cut is shown in the following figures. How would this paper look when unfolded?

Select the Venn diagram that best illustrates the relationship between the following classes.
Musicians, Females, Daughters

Select the combination of letters that when sequentially placed in the blanks of thegiven series will complete the series.
l _ chtlgc _ tlg _ht _ gc _ tlgch _

Select the option figure that is embedded in the given figure (rotation is NOT allowed). 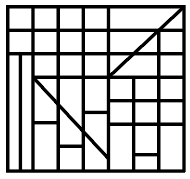 Three different positions of the same dice are shown. Select the letter/number that will be on the face opposite to the face having the letter ‘U’.