It’s easy to forget that most of the world’s languages are still transmitted orally with no widely established written form. While speech communities are increasingly involved in projects to protect their languages - in print, on air and online - orality is fragile and contributes to linguistic vulnerability. But indigenous languages are about much more than unusual words and intriguing grammar: They function as vehicles for the transmission of cultural traditions, environmental understandings and knowledge about medicinal plants, all at risk when elders die and livelihoods are disrupted.

Both push and pull factors lead to the decline of languages. Through war, famine and natural disasters, whole communities can be destroyed, taking their language with them to the grave, such as the indigenous populations of Tasmania who were wiped out by colonists. More commonly, speakers live on but abandon their language in favor of another vernacular, a widespread process that linguists refer to as “language shift” from which few languages are immune. Such trading up and out of a speech form occurs for complex political, cultural and economic reasons - sometimes voluntary for economic and educational reasons, although often amplified by state coercion or neglect. Welsh, long stigmatized and disparaged by the British state, has rebounded with vigor.

Many speakers of endangered, poorly documented languages have embraced new digital media with excitement. Speakers of previously exclusively oral tongues are turning to the web as a virtual space for languages to live on. Internet technology offers powerful ways for oral traditions and cultural practices to survive, even thrive, among increasingly mobile communities. I have watched as videos of traditional wedding ceremonies and songs are recorded on smartphones in London by Nepali migrants, then uploaded to YouTube and watched an hour later by relatives in remote Himalayan villages . . .

Globalization is regularly, and often uncritically, pilloried as a major threat to linguistic diversity. But in fact, globalization is as much process as it is ideology, certainly when it comes to language. The real forces behind cultural homogenization are unbending beliefs, exchanged through a globalized delivery system, reinforced by the historical monolingualism prevalent in much of the West.

Monolingualism - the condition of being able to speak only one language - is regularly accompanied by a deep-seated conviction in the value of that language over all others. Across the largest economies that make up the G8, being monolingual is still often the norm, with multilingualism appearing unusual and even somewhat exotic. The monolingual mindset stands in sharp contrast to the lived reality of most the world, which throughout its history has been more multilingual than unilingual. Monolingualism, then, not globalization, should be our primary concern.

Multilingualism can help us live in a more connected and more interdependent world. By widening access to technology, globalization can support indigenous and scholarly communities engaged in documenting and protecting our shared linguistic heritage. For the last 5,000 years, the rise and fall of languages was intimately tied to the plow, sword and book. In our digital age, the keyboard, screen and web will play a decisive role in shaping the future linguistic diversity of our species.

From the passage, we can infer that the author is in favour of:


Multilingualism can help us live in a more connected and more interdependent world.

Throughout the passage, the author is advocating for greater language diversity and suggesting how to counter the threat to the same. Multilingualism is something that the author has supported as cited above. Hence, Option A is the answer.

More commonly, speakers live on but abandon their language in favor of another vernacular, a widespread process that linguists refer to as “language shift” from which few languages are immune.

Since the author advocated the preservation of languages, he would likely be against this shift, as it endangers languages. Option B can be eliminated.

Again, the author is pushing for more diversity and preservation of cultures instead of homogenization of the same. Option C can be eliminated.

The author does not push for state intervention in the preservation of languages. Hence, Option D would not be the answer. 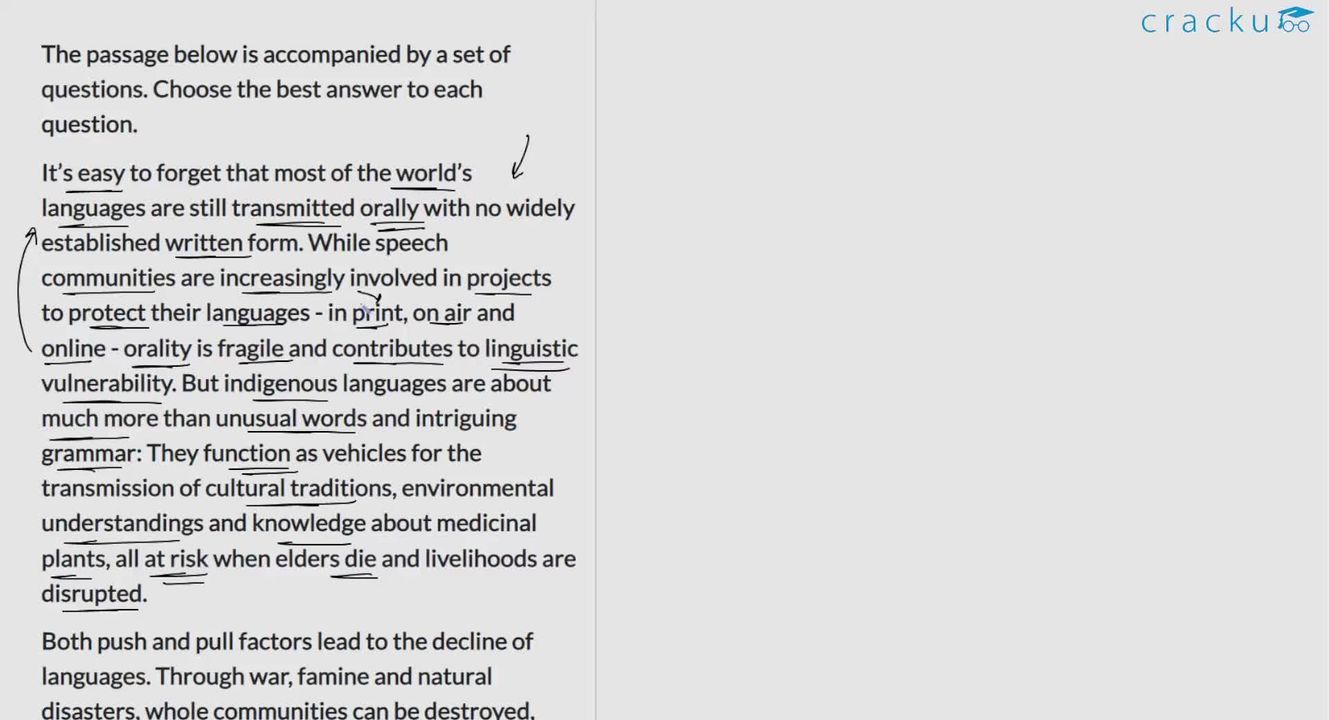