Read the  following  discussion/passage  and provide an appropriate answer for the questions that follow.

Of the several features of the Toyota Production System that have been widely studied, most important is the mode of governance of the shop - floor at Toyota. Work and inter - relations between workers are highly scripted in extremely detailed ‘operating procedures’ that have to be followed rigidly, without any deviation at Toyota. Despite such rule - bound rigidity, however, Toyota does not become a ‘command - control system’. It is able to retain the character of a learning organization

One implication of this arrangement is that system design can no longer be rationally optimal and standardized across the organization. It is quite common to find different work norms in contiguous assembly lines, because each might have faced a different set of problems and devised different counter - measures to tackle it. Design of the coordinating process that essentially imposes the discipline that is required in large - scale complex manufacturing systems is therefore customized to variations in man - machine context of the site of action. It evolves through numerous points of negotiation throughout the organization. It implies then that the higher levels of the hierarchy do not exercise the power of the fiat in setting work rules, for such work rules are no longer a standard set across the whole organization.

It might be interesting to go through the basic Toyota philosophy that underlines its system designing practices. The notion of the ideal production system in Toyota embraces the following -‘the ability to deliver just - in - time (or on demand) a customer order in the exact specification demanded, in a batch size of one (and hence an infinite proliferation of variants, models and specifications), defect - free, without wastage of material, labour, energy or motion in a safe and (physically and emotionally) fulfilling production environment’. It did not embrace the concept of a standardized product that can be cheap by giving up variations. Preserving consumption variety was seen, in fact, as one mode of serving society. It is interesting to note that the articulation of the Toyota philosophy was made around roughly the same time that the Fordist system was establishing itself in the US automotive industry.

What could be the best defence of the “different work norms in contiguous assembly lines”?


Only option B talks about the philosophy of Toyata system where worker can use their problem solving ability to tackle different kinds of problems. Right of manager mentioned in option A, right of workers in C, and low investment in Toyata plants cannot be inferred from the passage. Option E is contradictory. 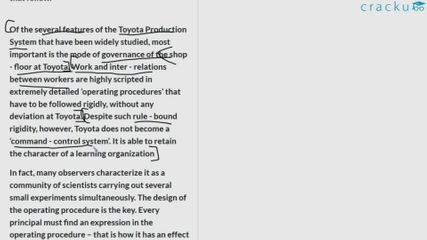