Read the passage carefully and answer the questions given below:

The magic of squatter cities is that they are improved steadily and gradually by their residents. To a planner’s eye, these cities look chaotic. I trained as a biologist and to my eye, they look organic. Squatter cities are also unexpectedly green. They have maximum density—1 million people per square mile in some areas of Mumbai—and have minimum energy and material use. People get around by foot, bicycle, rickshaw, or the universal shared taxi.

Not everything is efficient in the slums, though. In the Brazilian favelas where electricity is stolen and therefore free, people leave their lights on all day. But in most slums recycling is literally a way of life. The Dharavi slum in Mumbai has 400 recycling units and 30,000 ragpickers. Six thousand tons of rubbish are sorted every day. In 2007, the Economist reported that in Vietnam and Mozambique, “Waves of gleaners sift the sweepings of Hanoi’s streets, just as Mozambiquan children pick over the rubbish of Maputo’s main tip. Every city in Asia and Latin America has an industry based on gathering up old cardboard boxes.” . . .

In his 1985 article, Architect Peter Calthorpe made a statement that still jars with most people: “The city is the most environmentally benign form of human settlement. Each city dweller consumes less land, less energy, less water, and produces less pollution than his counterpart in settlements of lower densities.” “Green Manhattan” was the inflammatory title of a 2004 New Yorker article by David Owen. “By the most significant measures,” he wrote, “New York is the greenest community in the United States and one of the greenest cities in the world . . . The key to New York’s relative environmental benignity is its extreme compactness. . . . Placing one and a half million people on a twenty - three-square-mile island sharply reduces their opportunities to be wasteful.” He went on to note that this very compactness forces people to live in the world’s most energy-efficient apartment buildings. . . .

Urban density allows half of humanity to live on 2.8 per cent of the land. . . . Consider just the infrastructure efficiencies. According to a 2004 UN report: “The concentration of population and enterprises in urban areas greatly reduces the unit cost of piped water, sewers, drains,roads, electricity, garbage collection, transport, health care, and schools.” . . .

[T]he nationally subsidised city of Manaus in northern Brazil “answers the question” of how to stop deforestation: give people decent jobs. Then they can afford houses, and gain security. One hundred thousand people who would otherwise be deforesting the jungle around Manaus are now prospering in town making such things as mobile phones and televisions. . . .

Of course, fast-growing cities are far from an unmitigated good. They concentrate crime, pollution, disease and injustice as much as business, innovation, education and entertainment. . . . But if they are overall a net good for those who move there, it is because cities offer more than just jobs. They are transformative: in the slums, as well as the office towers and leafy suburbs, the progress is from hick to metropolitan to cosmopolitan . . .

Which one of the following statements would undermine the author’s stand regarding the greenness of cities?


The rapid spread of diseases in the slum would only affect the people in the slums and not the greenness of the cities. Hence it is incorrect.

Option C is incorrect as the incidence of crime in the West would not impact the greenness of the cities.

Increasing cost of utilities , in the same way would not affect the flora of the cities.

An increase in carbon-di-oxide and global warming, however, would contribute greatly to the change in climate. A change in climate would adversely affect the greenery in the cities. Hence, this would greatly undermine the author's stand that cities are indeed green. 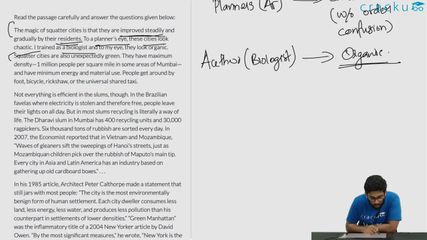