Around the world, capital cities are disgorging bureaucrats. In the post-colonial fervour of the 20th century, coastal capitals picked by trade-focused empires were spurned for “regionally neutral” new ones. But decamping wholesale is costly and unpopular; governments these days prefer piecemeal dispersal. The trend reflects how the world has changed. In past eras, when information travelled at a snail’s pace, civil servants had to cluster together. But now desk-workers can ping emails and video-chat around the world. Travel for face-to-face meetings may be unavoidable, but transport links, too, have improved.

Proponents of moving civil servants around promise countless benefits. It disperses the risk that a terrorist attack or natural disaster will cripple an entire government. Wonks in the sticks will be inspired by new ideas that walled-off capitals cannot conjure up. Autonomous regulators perform best far from the pressure and lobbying of the big city. Some even hail a cure for ascendant cynicism and populism. The unloved bureaucrats of faraway capitals will become as popular as firefighters once they mix with regular folk.

Beyond these sunny visions, dispersing central-government functions usually has three specific aims: to improve the lives of both civil servants and those living in clogged capitals; to save money; to redress regional imbalances. The trouble is that these goals are not always realised.

The first aim—improving living conditions—has a long pedigree. After the second world war, Britain moved thousands of civil servants to “agreeable English country towns” as London was rebuilt. But swapping the capital for somewhere smaller is not always agreeable. Attrition rates can exceed 80%. . . . The second reason to pack bureaucrats off is to save money. Office space costs far more in capitals. Agencies that are moved elsewhere can often recruit better workers on lower salaries than in capitals, where well-paying multinationals mop up talent.

The third reason to shift is to rebalance regional inequality. Norway treats federal jobs as a resource every region deserves to enjoy, like profits from oil. Where government jobs go, private ones follow. Sometimes the aim is to fulfil the potential of a country’s second-tier cities. Unlike poor, remote places, bigger cities can make the most of relocated government agencies, linking them to local universities and businesses and supplying a better-educated workforce. The decision in 1946 to set up America’s Centres for Disease Control in Atlanta rather than Washington, D.C., has transformed the city into a hub for health-sector research and business.

The dilemma is obvious. Pick small, poor towns, and areas of high unemployment get new jobs, but it is hard to attract the most qualified workers; opt for larger cities with infrastructure and better-qualified residents, and the country’s most deprived areas see little benefit.

Others contend that decentralisation begets corruption by making government agencies less accountable. A study in America found that state-government corruption is worse when the state capital is isolated—journalists, who tend to live in the bigger cities, become less watchful of those in power.

The “dilemma” mentioned in the passage refers to:


"The dilemma is obvious. Pick small, poor towns, and areas of high unemployment get new jobs, but it is hard to attract the most qualified workers; opt for larger cities with infrastructure and better-qualified residents, and the country’s most deprived areas see little benefit"

Option A is incorrect. The passage makes no mention of having the government agencies in the "largest" city. It talks about having them in "larger cities". Hence it is incorrect.

Option D makes no mention of decongesting large cities. Hence it is incorrect.

Option B makes the right comparison. It compares the hard task of relocating qualified workers to smaller towns, to allocating workers to larger cities, which would result in smaller towns receiving little benefit.

Option B is the correct answer. 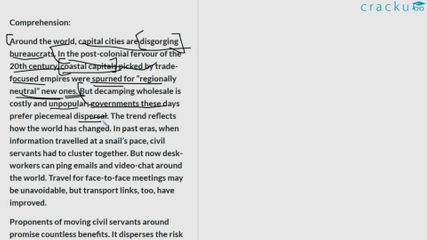