I’ve been following the economic crisis for more than two years now. I began working on the subject as part of the background to a novel, and soon realized that I had stumbled across the most interesting story I’ve ever found. While I was beginning to work on it, the British bank Northern Rock blew up, and it became clear that, as I wrote at the time, “If our laws are not extended to control the new kinds of super-powerful, super-complex, and potentially super  risky investment vehicles, they will one day cause a financial disaster of global-systemic proportions.” . . . I was both right and too late, because all the groundwork for the crisis had already been done—though the sluggishness of the world’s governments, in not preparing for the great unraveling of autumn 2008, was then and still is stupefying. But this is the first reason why I wrote this book: because what’s happened is extraordinarily interesting. It is an absolutely amazing story, full of human interest and drama, one whose byways of mathematics, economics, and psychology are both central to the story of the last decades and mysteriously unknown to the general public. We have heard a lot about “the two cultures” of science and the arts—we heard a particularly large amount about it in 2009, because it was the fiftieth anniversary of the speech during which C. P. Snow first used the phrase. But I’m not sure the idea of a huge gap between science and the arts is as true as it was half a century ago—it’s certainly true, for instance, that a general reader who wants to pick up an education in the fundamentals of science will find it easier than ever before. It seems to me that there is a much bigger gap between the world of finance and that of the general public and that there is a need to narrow that gap, if the financial industry is not to be a kind of priesthood, administering to its own mysteries and feared and resented by the rest of us. Many bright, literate people have no idea about all sorts of economic basics, of a type that financial insiders take as elementary facts of how the world works. I am an outsider to finance and economics, and my hope is that I can talk across that gulf.

My need to understand is the same as yours, whoever you are. That’s one of the strangest ironies of this story: after decades in which the ideology of the Western world was personally and economically individualistic, we’ve suddenly been hit by a crisis which shows in the starkest terms that whether we like it or not—and there are large parts of it that you would have to be crazy to like—we’re all in this together. The aftermath of the crisis is going to dominate the economics and politics of our societies for at least a decade to come and perhaps longer.

Which one of the following, if true, would be an accurate inference from the first
sentence of the passage?


This is a direct inference question that requires minimal effort and can be accurately answered using the option-elimination mechanism. The first sentence of the passage is as follows: " ...I’ve been following the economic crisis for more than two years now...". It is evident that the author has been following {events/information associated with} the economic crisis for at least two years if not more. Thus, Option A is a sensible inference to draw from this statement. Options B, C and D are inane interpretations of the same and can be effortlessly eliminated. 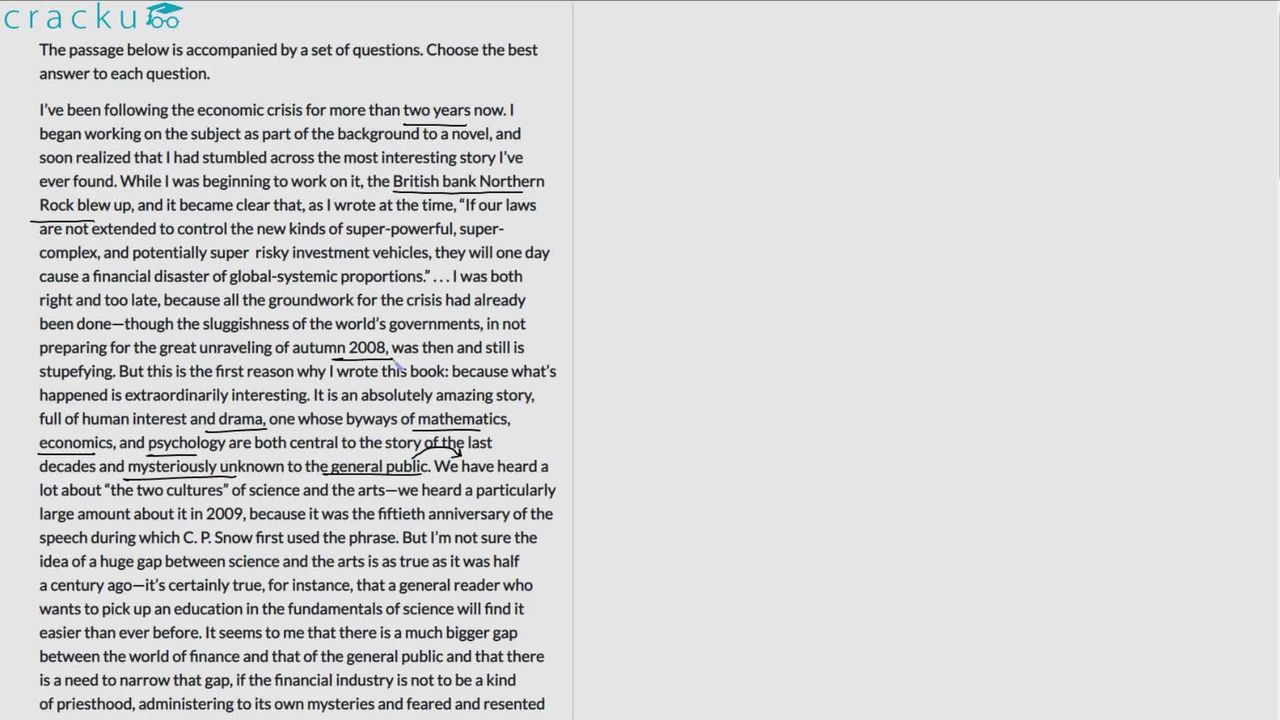