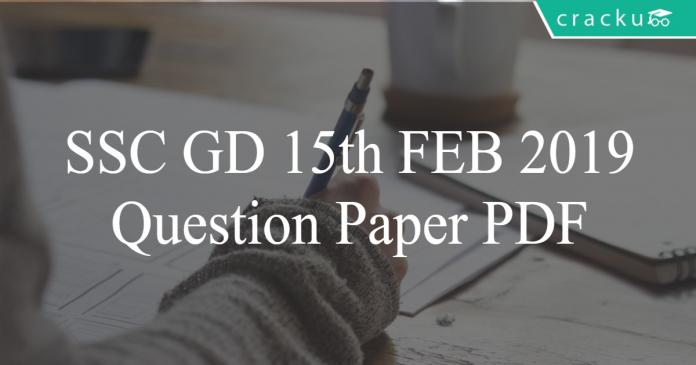 SSC GD Computer Based exam for the recruitment of 54953 posts is being conducted from 11th Feb 2019 – 11th March 2019. SSC has conducted exam on 15th Feb in all the three shifts. The total duration of the exam is 90 mins. In this blog, we will go through all the questions that are asked in 15th Feb exam from all shifts.

Computer Based Test for SSC GD will be in both English/Hindi languages.

Question 2: Who is winner of Women Badminton Championship 2018?

Question 3: Which Sangeet is popular in Maharashtra ?

Question 4: Where is Tomb of Sher Shah Suri Located

Question 5: Ayushman Bharat Yojana is related to which ?

Question 6: Which Capital of Indian State is famous for Cotton Clothes ?

Question 9: Lima is the capital of which country ?

Question 10: Name the space-shuttle in which Kalpana Chawla died ?

Question 11: Which country will host the 33rd Olympics ?

Question 12: Which film has achieved the 90th Oscar Award ?

Question 13: The Birthplace of Kalpana Chawla ?

Question 14: How many days does the moon take to complete the revolution around Earth?

Question 16: In which schedule is the language kept?

Question 18: By using salt in water, the water volume increases or decreases?

Question 19: Moti Masjid is built by ?

Question 21: Rowlatt Act is passed in which year ?

Question 22: Highest quantity of Bauxite is found in which state of India ?

Question 23: Which crops are grown from June – July ?

Question 24: Who is called an angel of liberalization of the Indian economy?

Question 25: Use of Zinc Sulfate ?

Question 27: Which Sultan of Delhi imposed the jizya tax?

Question 29: Where is Longest Road Bridge(India) is built ?

Question 31: Which posting has been added by 73th Constitutional amendment?

Question 36: When was Our Constitution Accepted/approved?

Question 38: Which Indian President Died While serving in he Post?

Question 40: Who Is Known by The Name Of Deshbandhu?

Question 42: Who Is The Naval President Of India

Question 43: Earth Day is observed on:

Question 44: What is the Green Color in the Fireworks?

Question 45: Which Mirror is used in Solar cooker?

Question 47: Who is the architect of ‘Statue of Unity’?

Question 49: State of the largest producer of bauxite

Question 50: The author of the book ‘Exam Warriors’

Question 51: Who is known by the name of Metro Man of India?

Question 52: In 2019 Padma Shri awards were given to which players?

Question 53: Governor of Bengal during the partition of Bengal

Question 56: FIFA Player of the Year

Question 58: What was added in the 73rd Constitution Amendment

Question 63: Who founded the Swaraj Party

Question 66: What is the main part of the temple

Question 67: Where is the fair of Kumbh Mela

Question 69: Neptale is the polymer of which

Question 70: What is the elderly Ganges

12) Answer: The Shape of Water

19) Answer: Shah Jahan. It is located in Agra. It is also known as pearl Mosque.

20) Answer: Durga Puja, held in September-October, is the biggest and most important festival of West Bengal.

22) Answer: Odisha, produces more than half of the total production of India.

25) Answer: Zinc sulfate is used medically as a dietary supplement.