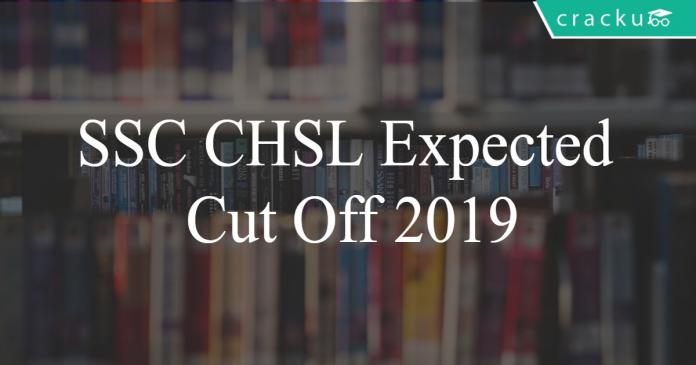 Staff Selection Commission(SSC) is likely to release the notification for most awaited SSC CHSL on 05th March 2019. SSC will conduct the recruitment exam for SSC- Combined Higher Secondary Level (CHSL) on  01/07/2019 to 26/07/2019.

The admit card for the exam is to be updated on the official website soon after its release.

SSC CGL aspirants can attempt this exam as a backup option too. Before starting preparation, it might be helpful for the candidates to know about the target shooting for. In this blog let us learn about the expected Cut-Off for SSC CHSL 2019.

SSC Exam Online Preparation can help aspirants in getting selected for the exam. Candidates can go through the SSC CHSL Previous Papers to know the pattern of the exam.

Tier 1 contains 4 different sections- Reasoning, English, Quantitative aptitude, General awareness. The duration of the exam is 60 mins. Marks scored in Tier-1 has a major role in the final selection of candidates.

The Tier-2 exam is a descriptive paper to test the language skills of the candidates. The question paper has two questions Essay writing and Letter Writing. The Total time duration of the exam is 1 hour. Candidates must score at least 33 marks(out of 100) to get to the next level.

Tier- 3 exam is also known as DEST (Data Entry Skill Test). In this exam, Candidates are tested on their typing skills.

The Tier-1 exam is the most important step in the entire recruitment process. The marks scored by the candidates in this exam are very important in the final selection. Candidates scoring at least the minimum marks will only be promoted to the next level of the exam.

Let us have a look at the previous years cutoffs to have an idea.

Cut Offs are selected based on the no. of vacancies, no. of candidates appearing for the exam and the difficulty level of the paper.

If the difficulty level remains same candidates can expect a slight increase in the cut-offs. To be in the process, candidates must try to score above 140. In descriptive paper, one can never be sure of marks one is likely to get. Therefore, aspirants must maximize their marks in the tier- 1 exam itself.

The Cut Off for Tier- 2 is 33 marks for all candidates. Aspirants failing to score 33 marks will be out of the race. Candidates need a daily practice in writing essays and knowing the formats of standard letters.

In the DEST exam, the cutoffs are different for different posts like Lower Divisional Clerk(LDC) and Data Entry Operator(DEO). However, we can consider the error rate below 5% to be safe. Tier- 3 exam is qualifying in nature.

To be eligible for the DEST Exam, Candidates must score the following marks cumulatively(tier 1+ tier 2).

As the cut-offs are very high, candidates must score decent marks in the tier-1 exam to get promoted to next levels in the exam and can help aspirants in the final selection.

We Hope this article is helpful in planning your preparation strategy.