b) Daughter in law

Question 3: Pointing to a boy, Meena said “He is the only grandson of my grandfather”. How is the boy related to Meena?

a) Cannot be determined

Question 7: How many meaningful english words can be formed from the letters ‘’ACER ‘’ using each letter once

Question 8: How many such pairs of letters are there in the word SCHEDULE (in both forward and backward directions),each of which has as many letters between them in the word as in the English alphabetical series?

Question 9: In a row of children facing NORTH Ritesh is twelfth from the left end .Sudhir who is twenty second from right end is fourth to the right of Ritesh . Total how many children are there in the row?

Question 11: Which of the following figures represents the relation between ‘Sparrows’, ‘Birds’ and ‘Crows’ ? 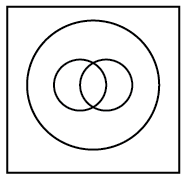 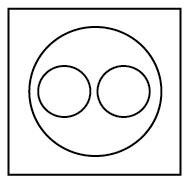 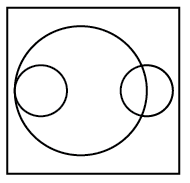 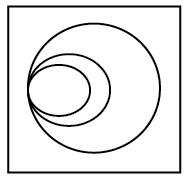 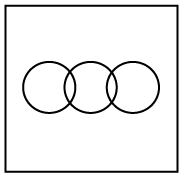 Question 12: Which of the following symbols should be placed in blank spaces respectively (in the same order from left to right) in order to complete the given expression in such a manner that both ‘W > R as well as ‘E ≥ S’ definitely hold true? W_E_A_R_ S

Question 14: Four of the following five are like in a certain code ,which one does not belongs to that group?

e) none of these

Question 16: Study the following information carefully and answer the question which follows : Farmers should use hydroponics for farming. Hydroponics is growing plants in liquid nutrient solution. Since it does not require soil, farmers can save a large amount of time by avoiding tilling and de-weeding of their fields. Which of the following statements does not weaken the given statement?

a) Initial set up cost for hydroponics is very high as the necessary equipment and inputs are three times more expensive than that used in traditional methods.

b) Disease causing micro-organisms that are water-based can enter and subsist much more easily in hydroponics based environment as compared to traditional farming.

c) Rather than using only hydroponics or only traditional farming, most of the farmers use both simultaneously.

d) Without soil to serve as a buffer, if the hydroponics system fails, plant death occurs very rapidly leading to loss of 70-85% crop.

e) The production using hydroponics is very limited and is more efficient for house gardens rather than large scale farming.

Question 18: If it is possible to form a number with the first, the fourth and the seventh digits of the number 4671358, which is the perfect square of a two-digit odd number, which of the following will be the digit in the tenth place of that two digit odd number ? If no such number can be formed, give ‘O’ as the answer and if more than one such number can be made, give ‘X’ as the answer.

Question 20: Four of the following five are alike in a certain way and so form a group. Which is the one that does not belong to that group?

Question 21: How many meaningful English words can be made from the letters NOEC using each letter only once in each word?

Question 22: In order of quality in an examination having six subjects one has to get at least 50% and above marks separately in any four subjects and minimum 35% and above in each of the six subjects. If the total of 25% candidates have qualified in the examination, then which of the following is definitely true?

Question 23: There are 25 students in a queue. Ravi is standing 12th from the back. What is his position from the front?

Question 25: In the following set of numbers if ‘1’ is added to the last digit of and then the order of digits is reversed ,which of the following will be the fourth if arranged in the ascending order 567 284 696 865 738

Music is composed from notes, similarly a language is made from sentences.

Thus, J is the daughter-in-law of L.

The boy is only grandson of Meena’s grandfather.

Thus, the boy can be either Meena’s brother or cousin, hence data is inadequate.

J neither has the most nor the least number of pencils.

Thus, N has the least number of pencils.

We can form 3 words from the given word “ACER” i.e CARE, RACE, ACRE.

There are 3 pairs of letters which have as many letters between them in the word as in the English alphabetical series.

Thus, he is facing south direction when he stopped walking.

Sparrows and crows are entirely different. But, both are birds.

Now, for above statements to be true, the expression :

Thus, the only true statement is = $P\leq B$

Here, all except Lotus are flowers which grow on land while lotus is a water flower.

The codes for each letter is given :

The given statement supports the use of hydroponics among farmers.

The first option definitely weakens the statement as it mentions the high cost of hydroponics. Similarly, the second option also states the disease caused by the water used in hydroponics, it also weakens the given statement.

The fourth option mentions about the loss of crop due to this method and the final option talks about its limitations, thus both weakening the statement.

But the third option gives a choice for the farmers to use hydroponics and thus does not weaken the given statement.

Now, if a number should be a perfect square of an odd number, then the number should also be odd, i.e. end with ‘1’ in this case.

2 meaningful words can be formed = Cone, Once

The criteria to qualify the examination is that a student has to get :

Since, only 25% students have qualified in the examination, then these students definitely got at least 35% and above marks in each of the subjects as given in the fourth option.

Ravi is standing 12th from the back. So, there are 13 students ahead of him. So, Ravi’s position is 14th from the front.

Arrange all the vowels and then consonants from left.

Hence, C is the correct answer.