Question 1: Who among the following Indian footballers has been named in the FIFA Video Campaign against Coronavirus?

Question 2: Andre Schembri, who recently announced his retirement, belongs to which of the following sports?

Question 3: Who among the following has been named as the BBC Indian Sportswoman of the year 2019?

Question 4: Saurashtra Cricket Team has defeated which of the following teams in the final to win its maiden Ranji Trophy title?

Question 5: Alyssa Healy creates a world record by becoming the highest scorer in a Women’s T20 International match. She plays for which country?

Question 6: Tejinder Pal Singh, who is the flag-bearer of India at the opening ceremony of South Asian Games 2019, is related to which sports?

Question 7: ‘Back heel’ is related to which sport?

Question 8: Where is the headquarters of the International Shooting Sport Federation(ISSF) situated?

Question 9: The term ‘face-off’ is related to which of the following sports?

Question 10: Who became the most expensive overseas player in Indian Premier League(IPL) in the year 2020?

Question 11: Which of the following sports players has won the most number of Olympics gold medals?

Question 12: ‘Free throw’ is given in which of the following games ?

Question 13: ‘Quessberry Rules’ is the name given to the rules in

Question 14: ‘Prince of Wales Cup’ is associated with the game of

Question 15: What is the distance of running in a marathon race?

Question 16: With which game is the term “bogey” associated?

Question 17: Name the sport/games in which the term ‘Cue’ is generally used

Question 18: Abu Dhabi has been selected as the world’s leading Sports tourism Destination at the 26th edition of the World Travel Awards (WTA) which was held at _____

Question 19: The Rajiv Gandhi Khel Ratna award was given to Deepa Malik. She plays which sport?

Question 20: Abdul Qadir, a master leg spinner passed away. He was known as the dancing bowler because of his style. He represented which country?

Sunil Chhetri, Indian Football Captain, has been selected among 28 players for FIFA Video Campaign against Coronavirus launched by FIFA and WHO to combat against Coronavirus. ‘Pass the message to kick out Coronavirus’ campaign promotes 5 steps to protect people’s health according to guidance by WHO.

Andre Schembri, Maltese Footballer, has announced his retirement from professional Football. He played his last match for Chennaiyin FC in Hero Indian Super League (ISL) against ATK Football Club on March 14th, 2020. ATK FC has defeated Chennaiyin FC by 3-1 in the final match of ISL.

Alyssa Healy who plays for Australia creates a world record becoming the highest scorer in a women’s T20I match. She surpassed Meg Lanning (Australia) who scored 133 runs. Healy scored 148 runs off 61 balls against Sri Lanka in the third T20I of “Sri Lanka Women tour of Australia, 2019”.

The 13th edition of South Asian Games began in Kathmandu Nepal. The official mascot of this year’s South Asian Games is “Krishnasar” which is a blackbuck antelope. India is represented by 487 players. India finished with 1st position on the medal tally with 312 medals which includes 174 gold, 93 silver and 43 bronze medals. Tejinder Pal Singh who is India’s flag-bearer at the opening ceremony of the games won a gold medal in Men’s Shot put.

Back heel is a kick played by the heel which typically travels in the opposite direction from which the player is facing.

The headquarters of the International Shooting Sport Federation(ISSF) is situated in Munich, Germany.

The term ‘face-off’ is related to hockey games.

The Australian pacer Pat Cummins, with a base price of Rs.2 crore, became the most expensive overseas player in the Indian Premier League (IPL) as he was sold to Kolkata Knight Riders (KKR) for a whopping Rs.15.50 crore($2.2 million).

Michael Phelps is an American swimmer who has won 23 gold medals in all Olympics games from 2004 to 2016.

She is the first Indian woman to win a medal in Paralympic Games and won a Silver medal at the 2016 Summer Paralympics in the shot put. She has also won gold in F-53/54 Javelin event at the para athletic Grand Prix held in Dubai in 2018. She is currently the world’s number one in the F-53 category.

Abdul Qadir played cricket for Pakistan for 16 years and took 236 wickets in 67 Test matches and 132 wickets in 104 ODIs. 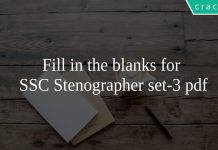 Fill in the blanks for SSC Stenographer Set-3 PDF 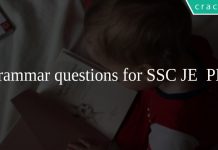