General Knowledge and General science have a very high weightage in Railway exams. So, preparing for the GK part is must for all railway (RRB exam) aspirants. Recently as there is huge recruitment of Assistant loco pilot and Technician and also Group-D posts, it is good time to prepare for railway exams. So, we have provided some railway GK-General knowledge notes. Download RRB GK Notes useful for RRB ALP & Technician and Group-D exams.

You can download the PDF notes for railway General knowledge (GK) for the topics below. 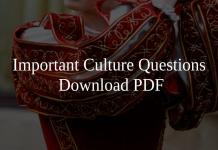