Question 2: Select the odd number-pair from the given alternatives.

Question 3: In each of the following questions, a series is given, with one/two term missing. Choose the correct alternative from the given ones that will complete the series.
ZbYa XdWc VfUe ?

Question 4: In a row of students Ganesh is 7th from one extreme and 11th from the other. Find the total numbers of students in the row.

Question 5: Six games are kept one on top of the other. Uno is just above Snakes & Ladders. The Monopoly is between Ludo and Chess. Carrom is between Uno and Ludo. Which game is between the Carrom and Monopoly games?

In the following question, by using which mathematical operators will the expression become correct?

In the following 5 questions, a series is given, with one term missing. Choose the correct alternative from the given ones that will complete the series.

Question 12: In a row of buses, Punjab is at 19th position from the right end. Raftaar is 23 places to the left from Punjab and is at the exact centre of row. How many buses are between Raftaar bus and bus standing at the left end?

Question 15: In a row of people Manu is 7th from bottom end of row. Shrey is 10 ranks above Manu. If Shrey is 8th from top end, then how many people are there in this row?

Question 16: In a class of 45 students, a boy is ranked 20th When two boys joined, his rank was dropped by one. What is his new rank from the end?

Question 17: From the given alternatives, select the word which CANNOT be formed using the letters of the given word.
Obliterate

Question 18: From the given alternatives, select the word which CANNOT be formed using the letters of the given word.
Government

Mr. A started from point X and travelled 80 m towards east, his entire movement is shown by :

Thus, his final position is 80 m towards East from his starting point.

Except the first option, the numbers are of the form $n:4n-1$

As Ganesh is 7th from one extreme end (say left end), number of students to his left will be ‘6’ and also,

Uno is just above Snakes & Ladders and Carrom is between Uno and Ludo, => Carrom is just below Ludo and just above Uno.

Thus, Ludo is between the Carrom and Monopoly games.

The above series consists of 3 consecutive letters from the English alphabetical series, i.e. HIJ, PQR and DEF.

So, the letter that comes before V is U.

If we replace ‘Δ’ with ‘-‘, and multiply the difference by 10, we get the desired result.

The pattern followed in each letter of the terms is :

Since, Raftaar’s bus is also at the centre, => Number of buses between Raftaar bus and bus standing at the left end (eliminating these two buses)

According to the given question,

In a class of 45 students, a boy is ranked 20th When two boys joined,

His new rank from the end:

Option A is correct.

The word OBLITERATE does not contain any ‘F’, thus the term Life cannot be formed.

The word GOVERNMENT does not contain any ‘D’, thus the term Need cannot be formed.

B’s wife’s husband’s is B himself.

$\therefore$ A is the brother of C.

We hope this Expected Reasoning Questions set-2 pdf for SSC CHSL 2020 Exam preparation is so helpful to you. 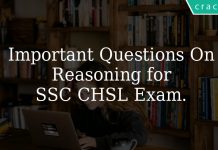 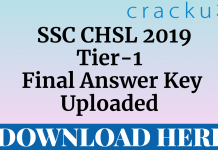