Instructions Directions :In the following questions choose the word opposite in meaning to the given word.

Question 3: The laboratories are …………with high-tech electronic gadgets.

Question 4: Software companies have ushered in…………….. culture along with advanced
technology.

InstructionsDirections :Sentences are given with blanks to be filled in with an appropriate word(s). Four alternatives are suggested for each question. Choose the correct alternative out of the four.

Question 5: The hotel was not too expensive

Question 6: Like humans, zoo animals must have a dentist to __ their teeth

d) to be filled

InstructionsDirections: In the following questions,some of the sentences have errors and some have none. Find out which part of a sentence has an error. The number of that part is your answer. Your answer is ‘d’ i.e., No error.

a) He is a university professor

b) but of his three sons

c) neither has any merit.

a) After knowing truth,

b) they took the right decision

c) in the matter.

InstructionsDirections :In the following questions, a part of the sentence is printed in bold. Below are given alternatives to the bold part at A, B and C which may improve the sentence. Choose the correct alternative. In case no improvement is needed, your answer is d:.

Question 9: Since the records are missing, the possibility of paying more than one compensation for the same piece of land cannot be ruled aside.

Question 10: A callous system generates nothing but a mica- mope

InstructionsDirections :In the following questions, a sentence has been given in Active Voice/Passive Voice, Out of the four alternatives suggested, select the one which best expresses the same sentence in Passive/ Active Voice.

Question 11: They have made a film based on this novel.

a) A film was based on this novel and made.

b) A film have been made based on, this novel.

c) A film, based on this novel, has been made

d) A film has been based and made on this novel.

Question 12: The people couldn’t move me to the hospital and the doctor operated on me at home.

a) I couldn’t be moved to the hospital and was operated on at home by the doctor.

b) I couldn’t be moved to the hospital and I had to be operated on at home.

c) I couldn’t be moved to the hospital and I was operated at home by the doctor.

d) I couldn’t be moved to the hospital by the people and operated on at home.

Question 13: In the following question, a sentence has been given in Direct/Indirect speech. Out of the four alternatives suggested, select the one, which best express the same sentence in Indirect/Direct speech.
The injured old man exclaimed, ‘Will none of you help me?’

a) The injured old man exclaimed whether none of them would help him.

b) The injured old man exclaimed if none of them would help him.

c) The injured old man said that could anyone of them help him.

d) The injured old man cried if none of them would help him.

Question 14: In the following question, a sentence has been given in Direct/Indirect speech. Out of the four alternatives suggested, select the one, which best express the same sentence in Indirect/Direct speech.
Has anyone from our team answered your question?

a) Did someone from our team answer to your question?

b) Is your question been answered by someone from our team?

c) Has your question been answered by anyone from our team?

d) Have your question been answered by anyone from our team?

InstructionsDirections :In the following questions, the 1 stand the last sentences of the passage are numbered 1 and 6. The rest of the passage is split into four parts and named P, Q, R and S. These four parts are not given in their proper order. Read the sentence and find out which of the four combinations is correct. Then find the correct answer.

Question 15: 1. It is easy to criticize the people at the helm, for the slow progress in every field.
P. We are well aware that the intellectuals are leaving our country for better employment opportunities.
Q. Then question remains unanswered because our country cannot show opportunities to the intellectuals.
R. Then, what about their obligation to the Motherland ?
S. First, we should ask ourselves as to what is happening to the young intellectuals in India.
6. This situation of ‘Brain-Drain’ leads to a variety of problems.

Florid means having a red or flushed complexion.
In the given options A and C can be eliminated because they aren’t relevant.
Option D doesn’t mean that somebody is not red.
So the remaining option B is the right choice as “Pale” means light faded colour(red).

Verity means something that is regarded true.
So option C, Falsehood is the only word in the options which gives the opposite meaning of the given word.

The correct answer is option A.

Question tag -It is used when one wants to reconfirm ones statement.It is a statement followed by a question.

If the statement is positive, question tag will be negative and vice versa.

For ex- Shyam is working in a bank, isn’t he?

Question tags are formed with the auxiliary or modal verb from the statement and the appropriate subject.

A subject pronoun comes after an auxiliary or after `to be’ form of the verb & is used to replace the noun.

Here in the given question-

Hotel was not too expensive, wasn’t it?

Since the statement /main part of the sentence is in positive form, question tag will be negative.

Here `was’ is used in main part of the sentence,so in question tag we use `wasn’t’.

(Same verb/(auxiliary,modal,main)as that of the sentence)

To +V1 is called as the infinitive form if the verb.

After `to’ we use first form if the verb.

Infinitive form if the verb is used when we want to express the purpose,to answer why.

Why he do study -to make his parents proud.

Here it is used as a `Adverb’.It qualifies verb `Studied’.

In the given example, options -`to be filled,filling,filled’are wrong.Because after `to’ we can’t use 3rd form of the verb,rest options are grammatically incorrect.

There should be ‘the’ in between knowing and truth, because truth is a common noun.

callous (Adj.) : cruel ; not caring about people’s feelings or suffering generates (verb): to produce or create something misanthrope (Noun): a person who hates and avoids other people

The given sentence is in the active voice.

We need to change it into passive voice.

In passive voice it will be,

Active Voice-They have made a film based on this novel.

Passive Voice- A film, based on this novel, has been made.

The given sentence is in the present perfect form.

While changing it into passive voice,we need to use `been’ after helping verb.

The correct choice is C.

Option A -is in past form.(was is used)

Option B & D are grammatically incorrect.

Given sentence is in active voice(compounded using ‘and ‘) and change it into passive voice.

In this case we can eliminate the group of people. Simply I couldn’t be moved conveys the actual meaning. Then the word ‘ I ‘ don’t need to place again. since it’s connected using ‘and’.

So the correct answer is A.

1st sentence-It is easy to criticize the people at the helm, for the slow progress in every field.

Connectors– First, we should ask ourselves as to what is happening to the young intellectuals in India.

The introductory part of the sentence talks about general statement of criticising people for the slow progress.

Next part should tells more about that -sentence S’ is telling about that -it says instead of criticising people we should ask ourselves what is happening to the young intellectuals.

Connectors-We are well aware that the intellectuals are leaving our country for better employment opportunities.

What is happening to the young intellectuals of the country?

This question is answered in sentence ‘P’.

Connectors– Then, what about their obligation to the Motherland ?

sentence ‘P’ answered about the young intellectuals,only sentence `R’ seems to be most logical to follow after P.

Connectors–Then question remains unanswered because our country cannot show opportunities to the intellectuals.

Sentence ‘R’ questions about the obligation of young intellectuals towards Motherland.

Sentence ‘Q’ inform about that.Key is `Then question remains unanswered’

So correct sequence is- SPRQ.

We hope this Expected English Questions pdf for SSC CHSL Exam preparation is so helpful to you. 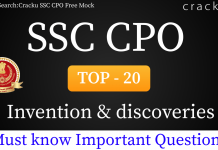 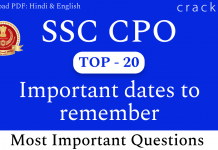 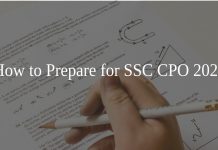 How to Prepare for SSC CPO 2020, CBT Exam And Physical Tests