Question 2: In a column of 20 boys D is fourteenth from the front and F is ninth from the bottom How many boys are there between D and F ?

Question 3: In a row of thirty-seven boys facing South R is the eighth to the right of T who is fourteenth to the left of D. How many boys are there between D and R in the row ?

Question 4: Harsha is standing in a queue, tenth from behind. There are 40 students in the queue including Harsha. What is Harsha’s position from the front?

Question 5: There are 25 students in a queue. Ravi is standing 12th from the back. What is his position from the front?

Question 6: In a class Saurav is ranked 274th from the first and 367th from the last. How many students are there in the class?

Question 7: In a class of n students. Akhil’s rank is 42 from the top. Sahil’s rank is 19 from the bottom. There are 29 students between Akhil and Sahil. Find the value of n.

Question 8: In a class, there are 120 students, where boys are twice that of girls, Ramu a boy was ranked 25th from the top if there are 10 girls ahead of Ramu. How many boys are after him in rank?

Question 9: Rahul’s rank in a class is 20 and he scored at least more than 75% of the class. What is the minimum strength of the class?

Question 10: Arjun who got 16th rank in a class got 75 percentile. How many students were there in his class?

All positions in this question will be from left end.

Total students in the row = 40

Since, Kailash was shifted 10 places to the left of Vikas => Kailash position = 16

Sameer was 10 places to the right of Raman.

Thus, not sufficient data is given.

where, the number in bracket is the number of boys between two boys satisfying the above conditions.

Thus, there are 5 boys between D and R.

Ravi is standing 12th from the back. So, there are 13 students ahead of him. So, Ravi’s position is 14th from the front.

Given, there are 29 students between Sahil and Akhil.

Hence, option B is the right choice.

According to given condition, class of 120 students has 80 boys and 40 girls. If Ramu was ranked 25th from first there are 24 students before him out of which 10 are girls, so remaining 14 students must be boys. So Ramu is the 15th boy from the top. Number of boys behind him is 80-15 = 65
Hence option B is the correct option.

We hope this Order and Ranking questions and answers for IBPS Clerk preparation will be helpful to you. 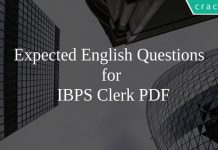 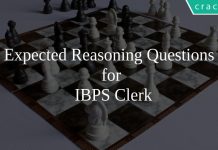 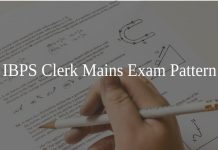