Instructions: Four friends A, B, C and D study in the same class in St. Theresa Public school. The first four ranks in the class were obtained by these four students. They also were the top 4 rankers in Mathematics. The following observations are made based on their overall class ranks and ranks of each subject.

Note: A lower numerical rank is considered as a higher rank

How many different combinations are possible for the class rank?

Who got the third rank in the class?

The exact Math ranks of how many people can be uniquely determined?

Who obtained the third rank in Maths ?

Factors of a number – Formulas for CAT

Formulas on Number system and factorials

Question 5: How many friends obtained the same rank for the math and class rank?

First let’s write down the conditions given for Class rank and Math rank separately.

We see A and B are present in both the columns. Thus, making assumptions based on them will yield the most result. Let’s first assume A has a lower Math rank than B.

From I, A has the least class rank. Thus, from IV, A has the highest Math rank. This contradicts our assumption. Thus, A definitely has a higher Math rank than B.

Thus, from I. B is 4th in Class rank. From V. B is the second in Math. Since A has higher Math rank than B, A will be the 1st in Math. Applying II, we get D is the 1st in the Class. Further using conditions III and IV, the following table can be formed. 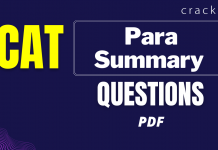 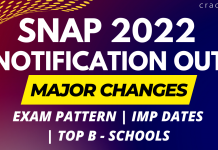 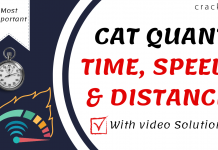