Seven varsity basketball players (A, B, C, D, E, F, and G) are to be honoured at a special luncheon. The players will be seated on the dais in a row. A and G have to leave the luncheon early and so must be seated at the extreme right. B will receive the most valuable player’s trophy and so must be in the centre to facilitate presentation. C and D are bitter rivals and therefore must be seated as far apart as possible.

Question 1: Which of the following cannot be seated at either end?

Five women decided to go shopping to M.G. Road, Bangalore. They arrived at the designated meeting place in the following order:

Each woman spent at least Rs. 1000. Below are some additional facts about how much they spent during their shopping spree.

vi. Shahnaz spent the largest amount and Chellamma the smallest.

Question 2: Which of the following amounts was spent by one of them?

In a seven day long mini-conference organized in memory of Paul Erdos, a close group of eight mathematicians, call them A, B, C, D, E, F, G and H, discussed some research problems. At the beginning of the conference, A was the only participant who had an infinite Erdos number. Nobody had an Erdos number less than that of F.

• At the end of the third day, five members of this group had identical Erdos numbers while the other three had Erdos numbers distinct from each other.

• On the fifth day, E co-authored a paper with F which reduced the group’s average Erdos number by 0.5. The Erdos numbers of the remaining six were unchanged with the writing of this paper.

• No other paper was written during the conference.

Directions for the following three questions: Answer the questions based on the passage below.

Question 4: Which of the following is a feasible group in four?

a) Ram, Peter, Fiza and Rahim

b) Shyam, Rahim, Kavita and David

Directions for the next 5 questions:

Sixteen teams have been invited to participate in the ABC Gold Cup cricket tournament. The tournament is conducted in two stages. In the first stage, the teams are divided into two groups. Each group consists of eight teams, with each team playing every other team in its group exactly once. At the end of the first stage, the top four teams from each group advance to the second stage while the rest are eliminated. The second stage comprises of several rounds. A round involves one match for each team. The winner of a match in a round advances to the next round, while the loser is eliminated, The team that remains undefeated in the second stage is declared the winner and claims the Gold Cup.

The tournament rules are such that each match results in a winner and a loser with no possibility of a tie. In the first stage a team earns one point for each win and no points for a loss. At the end of the first stage teams in each group are ranked on the basis of total points to determine the qualifiers advancing to the next stage. Ties are resolved by a series of complex tie-breaking rules so that exactly four teams from each group advance to the next stage.

Question 6: What is the total number of matches played in the tournament?

Four students — Ashish, Dhanraj, Felix and Sameer sat for the Common Entrance Exam for Management (CEEM). One student got admission offers from three NIMs (National Institutes of Management), another from two NIMs, the third from one NIM, while the fourth got none. Below are some of the facts about who got admission offers from how many NIMs and what is their educational background.

I. The one who is an engineer didn’t get as many admissions as Ashish.

II. The one who got offer for admissions in two NIMs isn’t Dhanraj nor is he a chartered accountant.

III. Sameer is an economist.

V. The doctor got the most number of admission offers.

Question 7: Which one of the following statements is necessarily true?

a) Ashish is a chartered accountant and got offer for admission in three NIMs.

b) Dhanraj is a doctor and got admission offer in one NIM.

c) Sameer is an economist who got admission offers in two NIMs.

d) Felix who is not an engineer did not get any offer for admission.

The following questions relate to a game to be played by you and your friend. The game consists of a 4 x 4 board (see below) where each cell contains a positive integer. You and your friend make moves alternately. A move by any of the players consists of splitting the current board configuration into two equal halves and retaining one of them. In your moves you are allowed to split the board only vertically and to decide to retain either the left or the right half. Your friend, in his/her moves, can split the board only horizontally and can retain either the lower or the upper half. After two moves by each player a single cell will remain which can no longer be split and the number in that cell will be treated as the gain (in rupees) of the person who has started the game. A sample game is shown below. So your gain is Re.1. With the same initial board configuration as above and assuming that you have to make the first move, answer the following questions.
Initial Board

After your move (retain left)

After your friends move (retain upper)

After your move (retain right)

After your friends move (retain lower)

Question 10: If your first move is (retain right), then whatever moves your friend may select you can always force a gain of no less than

According to given conditions we can conclude ,

Hence , F cannot be seated at either end.

We know that Shahnaz spent the most. Therefore, Shahnaz should have spent Rs.2571.

According to given conditions amount spent by everyone is,

Hence, option A is the right answer.

At the end of the fifth day, F co-authors with E thereby changing the average to 2.5 and the Erdos number of rest of the mathematicians remain unchanged.
Sum of the Erdos numbers of eight mathematicians=20
So here the difference of 4[24-20] arose, which means e will be f+5 initially and changed to f+1 after co-authoring with F.

At the end of the third day, five mathematicians had the same Erdos number and the rest had distinct Erdos number from each other.

It cannot be f+5 because then there will be two mathematicians with the same Erdos number f+1.

The only value which satisfies the above equation is f=1,x=7

According to given information, we finally know that ashish is a CA and will get 1 or no offers. dhanraj is doctor and gets 3 offers felix is an engineer and can get 2 offers.

Sameer is an economist and can get 2 offers. 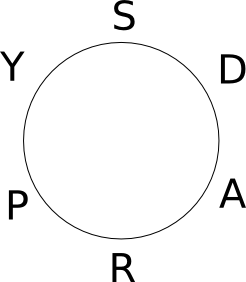 So after the changes, Suresh is to the left of Dhiraj.

We hope this Logical Reasoning Questions Set-2 PDF for CMAT with Solutions will be helpful to you. 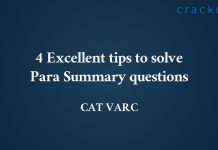 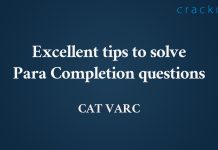 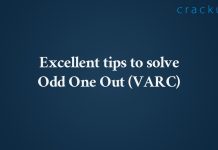 How to solve Odd one out in CAT VARC? 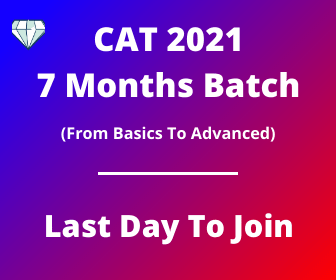