Question 1: World Meteorological Organization has designated which of the following countries as the nodal center for developing customized model to issue advance warnings of floods to Asian countries?

Question 2: Which of the following has become the first state in the country to implement the bio-fuel policy in India?

Question 3: Who among the following has been recently appointed as the CEO of HSBC India?

Question 4: Softbank has recently signed an MoU with which Indian company to launch cashless payment systems in Japan?

Question 5: What is the name of the multinational air exercise being held in Australia in which Indian Air Force will be participating for the first time?

Question 6: NABARD has recently launched first ever center for climate change in south east Asia in which of the following cities recently?

Question 7: All India Institute of Ayurveda has signed an MoU with which of the following technical institutions for enhancing research in the field of Ayurveda?

Question 9: Who among the following players won the Golden Boot award – Top Scorer, at the FIFA World Cup 2018?

Question 10: As per the FDI report published by FDI Intelligence, a division of Financial Times Ltd, which of the following countries has topped the list as top destination for greenfield foreign direct investment? 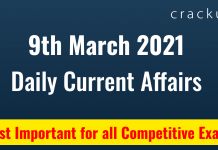