Question 3: Which of the following represents ‘risk also large’ ?

Question 5: Which of the three points lie in a straight line ?

Read the following information carefully and answer the question given below
A famous museum issues entry passes to all its visitors for security reasons Visitors are allowed in batches after every one hour In a day there are six batches A code is printed on entry pass which keeps on changing for every batch Following is an illustration of pass-codes issued for each batch
Batch I:
clothes neat and clean liked are all by
Batch II:
by cloths neat all are and clean liked
Batch III:
liked by clothes clean and neat all are and so on……

a) work hard to for succeed night and day

b) hard work for and succeed night to day

c) work hard for to succeed night and day

d) hard work for to succeed night and day

Question 8: Which of the following would be the last step for the input?

Study the following information carefully and answer the questions given below :
In a certain code language, ‘paint your house red’ is written as `ri fm ew cu’
`gate of red colour’ is written as ‘lb ew op sa’
‘house of your choice’ is written as ‘sa cu ri nk’
`gate with red paint’ is written ‘gy op ew fm’
(All codes are two letter codes only)

Question 9: What maybe the possible code for ‘gate crash’ in the given code language ?

Question 10: What would be the code for ‘essence’ ?

Study the given information and answer the given questions.
A, B, C, D, E, F and G are standing in a straight line facing North with equal distances between them, not necessarily in the same order.
Each one is pursuing a different profession – Actor, Reporter, Doctor, Engineer, Lawyer, Teacher and Painter not necessarily in same order.
G is fifth to the left of C. The Reporter is third to the right of G. F is fifth to the right of A. E is second to the left of D. F is not standing at either of the ends. There are only three people between the Engineer and the Painter. The Doctor is to the immediate left of the Engineer. The Lawyer is to the immediate right of the Teacher. B is not an Actor

Question 11: What is the D’s position with respect to the painter ?

a) Third to the left

b) Second to the right

c) Fourth to the right

d) Third to the right

Question 12: Which of the following is ‘’true’’ regarding T?

b) V is an immediate neighbour of T

e) Q sits second to the right of T

Question 14: What will come in place of question (?) mark in the following series ?
CD FG JK ? UV

Y $\bigstar$ Z means Y is mother of Z which means X and Z are siblings. Also, W is son of X which means Z is uncle/aunt of W and W is nephew of Z.

Hence, correct option is A.

=> M is husband of S and D is their daughter.

From the intersection of the first two information, we can conclude that “nu” and “gi” will either “Risk” or “very”.

From the intersection of the first and third information, we can conclude that “ta” will mean “associated”.

From the intersection of first and fourth information, “nu” will mean “risk” and hence, “gi” will mean “Very”

Hence, answer will be D

Based on the above conditions, the points when plotted on a graph are :

where the numbers in brackets is the distance between the two points. 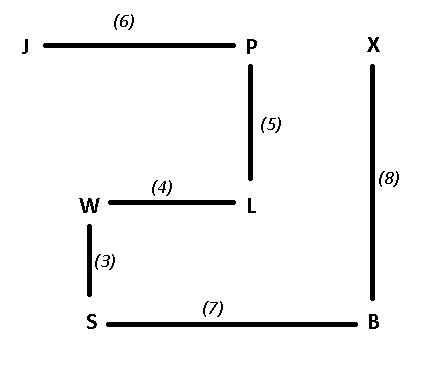 Clearly, J, P and X lie on a straight line.

Town R is to the South of town D. Town K is to the East of town R,

=> Town K is towards south-east of town D.

The pattern here followed is that the last word of the previous code becomes the first word for the next batch and the first and the second words shifted to the second and the third positions respectively. Again the seventh and the sixth words occupy the fourth and fifth positions respectively and then the third, the fourth and the fifth words of the previous code are written in the same order in the pass-code for the next batch.

To summarize, if we use numbers in place of the words, the arrangement will be :

=>Thus, we can write any required step from the given pass codes directly.

=> work hard for to succeed night and day

From conditions I & II, there is only one common word ‘red’ – ew

Since, code for red is known, then code for ‘gate’ – op

The word crash is not used in the above conditions, thus we need to find a solution with a code that is not used above and op

=> Only word left in first statement is ‘receiving‘ coded as = ‘ni’

=> Only word left in second statement is ‘essence‘ coded as = ‘lo’

Similarly, only word left in last statement is ‘industry‘ coded as = ‘dm’

As F is not at either end, only the second configuration is possible.

As E is second to the left of D, the placement is as follows

Lets number the boxes from 1 to 12 as shown below to discuss the
positions of the 12 people. S sits third to the right of Q and either of
them sits at an extreme end. This is possible in 2 ways.

In
Case 1, E sits in box 8. Now, there are 2 people sit between B and F
and neither B nor F sit at the extreme end. That is not a possibility.

So, we proceed with case 2.

Positions of B and F create 2 cases.

R and T are immediate neighbors of each other. So, they should be in 4 and 5.

The diagram therefore is as shown below:

That answers the question.

The pattern followed in each letter of the terms is :

The pattern followed is that whole numbers are written in increasing order and at the end ‘9’ is appended.

We hope this Expected Reasoning Questions for IBPS Clerk PDF will be highly useful for your preparation.