Data Interpretation questions, will be asked in numerical ability section of SBI Clerk. The questions will be appeared both in prelims and mains exam. There will be around 2-3 Sets having total of 6-10 questions on DI (Data Interpretation). Hence we have given some sample DI Questions from previous asked papers.

Study the following tables carefully and answer the questions given below:
Number of Candidates appeared in a Competitive Examination from five centres over the years 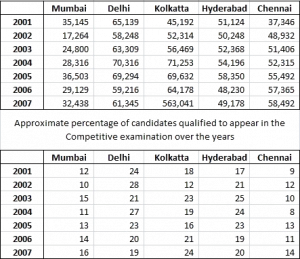 In which of the following years was the difference in number of candidates appeared from Mumbai over the previous year the minimum ?

In which of the following years was the number of candidates qualified from Chennai, the maximum among the given years ?

Approximately what was the total number of candidates qualified from Delhi in 2002 and 2006 together ?

Approximately how many candidates appearing from Kolkata in 2004 qualified in the competitive examination ?

Approximately what was the difference between the number of candidates qualified from Hyderabad in 2001 and 2002 ? 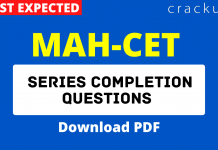 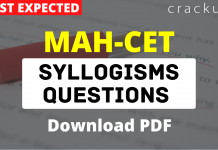